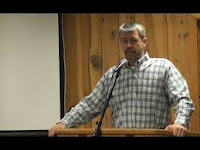 Paul Washer is a wingnut, Taliban-style fundamentalist preacher, missionary – he is the founder of the HeartCry Missionary Society, which supports indigenous missionaries evangelizing to people of their own culture – and author. Though nominally an adherent of sola fide – salvation through faith alone – he likes to denounce activities and people and threaten them with hell for a range of activities and interests: you see, if you do not adhere to his strict rules for correct behavior, you are automatically not a “true” believer and thus not covered by the principle. He once stated that if his children were to die unsaved, he would applaud God as he cast them into Hell.

Washer is perhaps most famous for a 2002 sermon to some 5,000 kids entitled “Shocking Message!” where he warned against the evils of worldly entertainment, emphasized God’s capacity for hate, and claimed that a majority of his audience would spend eternity in hell. A recurring feature of his sermons is the idea that a woman is committing a sin if she wears clothes that shows the shape of her body at all – “I mean, that’s just logic,” said Washer, expressing a somewhat off understanding of the word “logic” – which is, of course, precisely why his intellectual allies in Afghanistan recommended burqas.

One thing that distinguishes Washer from many fundies, however, is that he really claims that the US is the most wicked country on Earth because a large number of people who claim to be Evangelicals live a “worldly” lifestyle. Most preachers today are also too lenient and soft-minded about such issues and haven’t really taken the hate, anger and oppression that is at the core of Christianity sufficiently seriously – they are accordingly also to a large extent to blame for the moral decline of the world in general.

Washer is of course a creationist, and has in his sermons bragged about how he is able to shut up genuine university students by bringing up punctuated equilibrium (he just mentions the expression – he doesn’t seem to have the faintest idea what it means, mistakenly thinking it refers to some sort of objection to the theory of evolution) and irreducible complexity. Yes, you are pardoned for suspecting a tall tale. Then Washer claims that acceptance of the theory of evolution is really motivated by hatred of God, his evidence being the apparent dumbfounded reaction to Washer mentioning “punctuated equilibrium” and “irreducible complexity”, and concludes that any disagreement between science and fundie-motivated denialism and pseudoscience is “not an intellectual matter as much as it is a moral matter of the will.” He has also promoted Ray Comfort’s books.

Diagnosis: Fundie liars for Jesus are a dime a dozen, but Paul Washer is angrier and more extreme than most. He seems to have a bit of a following, too.