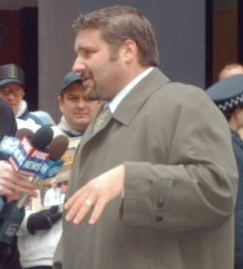 Our lucky 13th loon is Matt Barber. Barber is a columnist at Worldnetdaily (where do they find these people, seriously?). Also policy director for cultural issues at DC-based Concerned Women for America (an anti-gay organization), and spokesman for Liberty Legal Alliance. Very, very concerned about gay people, convinced gay marriage is unconstitutional and that there is a gay conspiracy out there (and Obama is in on the conspiracy because the Supreme Court didn’t quite agree about the unconstitutionality (yes, that’s the reasoning)). Barber has absolutely no insight into how the legal system works, which does not prevent him from commenting on it with brazen confirmation bias, fact-twisting and outright lies. Argues for taking children away from gay parents. Like so many of his ilk, Barber is also a moral relativist when it suits his purposes. Also has a serious persecution complex and is worried about gay jihadists.

A (typical) quote in advance of the 2008 election: ”If Bill Clinton was the first black president, Barack Obama, if elected, will be the first "gay" president. No, I don't mean he'll personally decorate the West Wing, open a bathhouse in the Rose Garden or take up with Barney Frank. I mean he'll be the most radically pro-homosexual, anti-family president in history. He's very quietly pledged as much to the homosexual "Human Rights Campaign" and other fawning members of his homofascist fan club” (note the interesting characterization of Obama voters in the last sentence).

Trivia: try to find the logical structure of the argument presented here.

Diagnosis: Moron; paranoid lunatic with a severe persecution complex; probably little impact beyond the group who already agrees with what he says (i.e. no power to persuade anyone).
Posted by chaospet at 10:04 AM