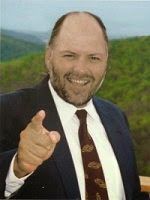 Richard Schulze is an N.D. (short for “not a doctor”), M.H. and – according to his webpage – “one of the FOREMOST Authorities on Natural Healing and Herbal Therapy in the World” [capitalization in the original]. He has operated various clinics and “designed Natural Therapy Programs, which have assisted tens of thousands of People Worldwide to create MIRACLES and REGAIN their Health.” Yes, his webpage – worth a visit – relies primarily on persuasion by random capitalization, it seems. He is also apparently a mainstay over at whale.to, where you can read about his ability to cure almost anything or, perhaps more precisely, help patients cure everything (AIDS, colon cancer, breast cancer, prostate cancer, Alzheimer’s … you name it, Schulze cures it, without bothering with the bureaucratic process of collecting evidence that his methods have actually cured any of these things). In general, Schulze’s screeds contain woefully few references to actual evidence but apparently capitalizing key words for emphasis is supposed to make up for that. They are also replete with misunderstanding and denialism, as exemplified by his denial of the role of genes in cancer.

If his techniques are so powerful, why aren’t they more generally accepted  (“the combination of Herbalism and Naturopathy is highly effective, to put it mildly, and would kick 98% of Allopathy into touch given a level playing field”)? Ah, you didn’t need to ask, did you? “[g]iven a level playing field” is the cue. You see, the playing field isn’t level. In reality, of course, the field is made uneven by the fact that real medicine relies on evidence, accuracy, testing, truth, reason, science and reality. And if those are the criteria, then herbalism and naturopathy are at a disadvantage, given that they have none of those things on their side. Of course, that’s not how Schulze sees it. Instead, there is a conspiracy out there – “[t]o see how the Allopaths suppress the competition: the Richard Shulze page on Wikipedia was deleted by an Allopath.” Therefore he is suppressed and therefore he must be right. Here you can see him explain how he is being suppressed by the government and the FDA in their well-known war on cures. (Here is an interview with the seriously misguided Shane Ellison about that war, for those who are in a masochistic mood.)

“His work in getting the knowledge out there (giving away all the secrets of Herbalism and Naturopathy), and putting his whole body over the parapet puts him in the ‘great man’ category, and they are pretty thin on the ground, but it just shows what one man can do. No longer can Allopaths get into the pulpit and say Herbal and Naturopathic medicine is quackery without being exposed as the true quacks themselves, […] and that is purely down to him, the Truth is well out of the bottle now.” At least you can’t accuse him of modesty or shying away from gibberish.

Diagnosis: Utterly ridiculous crank with the crackpot’s delusions of grandeur. Standard fare, but these are still the kinds of delusions that can lead to some real harm in the world beyond the Internet.
Posted by G.D. at 12:48 PM