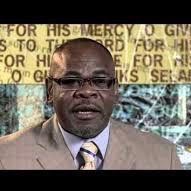 Even more anti-gay lunacy, this time from DL Foster, who is purportedly ex-gay (as recounted in his semiautubiographical Touching A Dead Man: One Man’s Explosive Story of Deliverance from Homosexuality) and is at least the founder and executive director of Witness Freedom Ministries, an outreach ministry that seeks to help people change their sexual orientation and refrain from same-sex relationships. He has also been associated with Exodus International, as well as with the Constitution Party.

Foster is, however, probably most familiar for his Gay Christian Movement Watch, a blog site that tries to draw attention to the “gay christian movement”. According to Foster, being gay and Christian is “blackface”. Meanwhile, he compares himself to Harriet Tubman because of his efforts on behalf of the ex-gay movement and anti-gay abolitionist campaigns (no, he makes no sense whatsoever), as well as to Jesus Christ. Accord to Foster “gay activists” of all races are like white slave owners (that’s from Foster comparing himself to Frederick Douglass) with “their lies, imtimidation [sic], violence, ridicule and unjust laws”, and people criticizing him, such as rightwingwatch, are like the slave catchers trying to bring ex-gays back to the gay plantation by exposing his work and “making sure the massahs and slave catchers are being kept abreast of my writings.” Here is an example of Foster engaging with critics. Yes, Foster’s writing and reasoning do exhibit a certain personal touch. We can’t deny that.

Given his premises, it is hardly surprising to find him arguing that the US will once again become “the land of the free” when we criminalize homosexuality. The US has lost that position to Russia, which is currently the “crown jewel” of deranged bigotry the freedom fighters for its “series of laws that literally enraged the homosexual world” (he doubted the US would even survive a repeal of Don’t Ask Don’t Tell). Behind everything is Satan, of course, who is convincing people that they were born gay, and who keeps sucking those who escape, the ex-gays, back in (yes, the situation is sad, but Foster’s inability to connect the dots is also pretty amazing).

He has also called for the arrest of Dan Savage, in virtue of him being the “creator of the so-called anti-bullying It Gets Better charade,” which Foster doesn’t like: Savage is responsible for giving gay teens “false promises” since people like Foster are going to continue to do their best to make sure that it doesn’t get better. With regard to prohibitions on reparative therapy Foster has likened supporters of such bans to the Ku Klux Klan and said that prohibitions on ex-gay therapy for minors would prevent survivors of sexual abuse “from getting much needed counseling” and encourage “suicidal” thoughts.

Foster’s attitude toward evidence is (not really) unusual. When Janet Boynes made up the claim that 80-85% women “struggling with homosexuality” have been victims of rape in the past, Foster agreed; and when it was pointed out that Boynes had just made up the figure, he concluded that “absent hard data from either side of the debate, I choose to believe” that the real figure is in that ballpark – and that lesbian activists agree with him: Having noticed that some people are addressing the pervasiveness of the problem of sexual assault toward lesbians (and all women), Foster also “choose[s] to believe” that they mean that 80-85% of lesbians have been victims of rape; hence, they agree with him. So that settles that.

He should not be confused with another fundamentalist loon, David Kyle Foster, although their views seem to overlap and they have even worked together on the documentary “Such Were Some of You”, aimed at the Sunday school market and intended to encourage impressionable people to consider “leaving homosexuality,” reject the “gay lifestyle”, and call out those who don’t (other contributing ex-gay activists were Anne Paulk, Linda Jernigan, Jeff Johnston, Robert Gagnon and Michael Brown).

Diagnosis: Hateful like Peter LaBarbera, but arguably in possession of even weaker reasoning skills, which he tries to make up for with more hatred. Dangerous.
Posted by G.D. at 3:59 AM