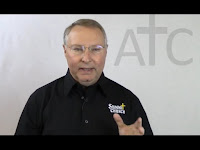 Michael R. Fox, climate change denialist (climate change is a conspiracy among researchers to obtain research money) and, apparently, HIV denialist has passed away, giving his spot in this Encyclopedia to yet another fundamentalist whacko, Terry Fox.

Terry Fox, as pastor of the Immanuel Baptist Church in Wichita (a position he later left to focus on his activism), came to attention in 2005, when he became involved, first, in a successful campaign to ban gay marriage and, second, in the now famous fight over the Kansas school board’s science standards. (His discussion with Eugenie Scott, in which he flaunts some impressive levels of ignorance, can be viewed here.) According to Fox, evolution is a “cult” and “the mother of all liberalism”, and the science standards for public education should be changed to also include creationism intelligent design in part because “most people in Kansas don’t think we came from monkeys” (which we hope is true, but not in the way Fox thinks). During his efforts he also cited the “homosexual agenda” and “taking Christ out of Christmas”. Just as well, I suppose – the debate was never about science in any case (also illustrated by board member Connie Morris, who called evolution a “fairytale” and, when she lost her bid, blamed the “lying liberal media” for her defeat). “If you can cause enough doubt on evolution, liberalism will die,” said Fox.

During the debates, Fox seemed to be dimly aware that getting evangelicism and young-earth creationism into public schools would potentially cause some legal problems, and supported the Discovery Institute strategy of introducing creationism in the name of “intellectual freedom”. So, although creationism was his goal (“creationism's going to be our big battle”), he was willing to take things one step at a time: “We’re trying to be a little more subtle,” said Fox. Unfortunately for him and the Discovery Institute, subtlety turned out not to be his strong suit.

Diagnosis: Oh, yes: Another crazy and hateful liar for Jesus. Fortunately for the rest of us, Fox isn’t very good at lying. We don’t know what he’s up to these days (he’s been heavily involved in anti-gay activism, at least) but it is surely nothing good.

Addendum: Actually, we do have some idea what he's up to. He's become a ghost buster! At his new church, Summit Church, the entire ministry team is "trained to help people who are battling the supernatural."
Posted by G.D. at 5:19 AM