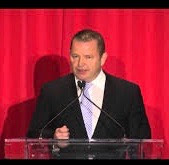 David Lane is, quite simply, one of the scariest and craziest people alive today. For years, he has been one of the leading and most influential Taliban-style dominionists (“Christian Nation” advocates) in the US, working steadfastly to increase the political power of fundamentalists and their causes. But he is still not particularly famous; as The New York Times put it, Lane is “something of a stealth weapon for the right,” who for the most part works well behind the scenes.

Funded to a large extent by the hate-group the American Family Association, Lane’s main goal is to motivate pastors and fundamentalists to take political action (“What we’re doing is the mobilization of pastors and pews to restore America to her Judeo-Christian heritage [i.e. the parts that fit with the bigotry and wingnuttery Lane happens to favor]. That’s our goal”), and to get crazies elected to public office. Lane has, as part of those efforts, organized huge Taliban rallies and political briefings with appearances by fundamentalist pastors and politicians such as David Barton (Lane served as the executive director of The Texas Restoration Project, funded by Barton), Mike Huckabee (Lane orchestrated Mike Huckabee’s surprise win in Iowa in 2008), Newt Gingrich and Michele Bachmann. As Lane puts it “What we’re doing with the pastor meetings is spiritual, but the end result is political. ... From my perspective, our country is going to hell because pastors won’t lead from the pulpits.” There is a good portrait of Lane (and how frightening he is) here, and another one (focusing on his extensive influence) here.

Dominionism
In a 2013 essay Lane declared that religious war may be on the horizon, and his influential American Renewal Project has continued to actively prepare for that war, hosting all-expenses paid policy briefings for clergy and their spouses to rally his forces. In addition to those mentioned above, participants have included politicians like Mike Pence, Marco Rubio and Ted Cruz. Donald Trump also addressed one such event in August 2016. As for ARP’s efforts to recruit and train clergy with a dominionist vision to run for office at all levels, at least Lane’s own pastor, Rob McCoy, won a city council seat in Thousand Oaks, California, in 2016 (though the results of the efforts have overall been a bit lackluster). The goal is explicit: “I don’t think there’s any such thing as a separation of church and state,” says Lane: “This was not established as a secular nation, and anybody that says that it is, they’re not reading American history. This was established by Christians for the advancement of the Christian faith. My goal is to return – to restore a biblically based culture and a Judeo-Christian heritage.”

Also in his 2015 essay “To Retake America, We Must Defeat Her False Religion” (for Charisma), the dominionist dog whistles sounded loud and clear. According to Lane, “[w]e just need a Gideon or Rahab the Harlot to stand.” According to the Bible Gideon, as you may recall, led an Israelite army in an ethnic cleansing of the pagan Midianites, and Rahab sheltered two Israelite spies in preparation for the fall of Jericho by Joshua’s army, where everyone but Rahab and her family were massacred. It’s worth thinking about why Lane chose those two examples.


Officially, of course, Lane advocates “religious freedom” (the goal of ARP is “to engage the church in a culture war for religious liberty”), which to him means that the Bible should be the primary textbook for public school students and that refusing to participate in school-led religious services and prayers should be banned – in the near future, predicts Lane, we will “watch Providence call for ‘punishment executed by angels’ to those who oppose His Word.” As a side note, is interesting to note how Lane juxtaposes predictions of victory and predictions of gloom – elsewhere, Lane has suggested that everything is going to hell and that we will soon have car bombs in Los Angeles and Iowa, and that such acts of terrorism will be God showing mercy on us (yes, his screeds often also veer into incoherent babble fuelled by hatred and delirious religious frenzy).

As opposed to religious fundamentalism, secularism is intolerant because secularists call people who want to criminalize homosexuality “bigots”. Secularists are also pawns of Satan. Not that Lane has a very clear understanding of “secularism”, which he thinks is simultaneously a religion and synonymous with liberalism. Ultimately, “secularism” is for Lane really just a catchall to designate anything he doesn’t like. But at least, according to Lane, “American education has collapsed under the weight of Secularism. Moral and academic anarchy now reign. Something curious has happened to those who define themselves as anti-fascist, who in reality are the fascists,” ostensibly because they criticize him and people like him for promoting the use of violence to establish a state in which everyone must bow to Lane’s religious convictions.

Unfortunately, however, God is at present “holding up His deliverance from pagan secularism in America” because of “flagrant sin” (indeed, “Barack Hussein Obama just might be the agent of the judgment of God on a nation that abandoned its Biblical-based culture”). Here is Lane claiming that the only alternative to Christian theocracy is Nazism. Here is Lane claiming that America is the great Satan.

Lane on American history
The main element in his case against the separation of church and state is that the Mayflower pilgrims were religious extremists and explicitly tried to create a theocratic British colony. That the US later decided to split with the British and write a Constitution not based on the Mayflower document is less relevant (and Lane tends to handwave and lie a bit about that part). In particular, he argues that the pilgrims, who believed that their undertaking was “for the glory of God and the advancement of the Christian faith,” created a covenant with God that America must currently renew in order to survive, and that “the Founders established America legally as a Christian nation at the state level, rather than the Federal” – “Founders” here of course meaning those who established the colonies before the Constitution (Lane explicitly calls the 1607 Jamestown British colony charter “America’s foundation” and no, he really doesn’t seem to know the difference between a British colony charter and the Constitution) – and approvingly cites state constitutions at the time that required officeholders to be Protestant Christians (Catholicism is of course as bad as secularism – i.e. catholics are pagans; Lane doesn’t distinguish between non-Christians and Christians who don’t advocate religious theocracy – and other “dead religion[s]”). Some of Lane’s lies about history are briefly discussed here.

And Lane probably knows that he is lying when he claims that currently “The Pledge of Allegiance is forbidden” and that “Christmas carols are banned”, but the lies serves their intended purpose, which is to scare those delusional enough to listen to him to begin with.

The gays
Lane has a long career of vigorous opposition to gay rights; “homosexual fascism” will destroy America, says Lane, apparently not caring too much about what “fascism” could possibly mean beyond the fact that he imagines his audience associates something bad with it. And back in the days he achieved some substantial victories. In the 1990s, Lane helped (with the California Restoration Project) place Proposition 22 on the ballot in California 2000 to restrict California marriages to heterosexual ones, which  passed. And together with Laurence White he later helped pass opposite-sex-only marriage amendments to the state constitutions of Ohio (2004), Texas (2005), and Florida (2006). Moreover, in November 2010, voters in Iowa removed three Iowa Supreme Court justices over their constitutional stance in a 2009 decision allowing same-sex couples to marry; The New York Times reported that Lane was the “unheralded mastermind” of the campaign against the justices, directing hundreds of thousands of dollars from Gingrich and the American Family Association. To motivate people into action against marriage equality Lane has of course realized that lying is a good strategy, and he has claimed for instance that ministers will be forced to “give approval” to “the homosexual lifestyle” or go to jail.

In 2013 Lane called on the “moral majority” to “wage war” against the “pagan onslaught imposing homosexual marriage,” apparently (or pretending to be) oblivious to the fact that the majority of Americans supported same-sex marriage. According to Lane, “those who embrace homosexual marriage and homosexual Scouting,” along with “pagan public schools, pagan higher learning and pagan media,” are ushering in America’s collapse with their “multicultural false gods.” “America’s survival is at stake,” said Lane, adding that “this is not tall talk or exaggeration,” apparently dimly suspecting that some might think otherwise. He also called on Christians to “risk martyrdom” to stop same sex marriage – apparently “American Christianity has not done a good job of producing martyrs” (oh, the Taliban envy) – and concluded that America has to choose between wholesale slaughter of Christians and adopting a theocracy (and rejecting “the fabricated whopper of the ‘Separation of Church and State’”).

Here is Lane calling for a boycott of Frito-Lay over their Rainbow Doritos, claiming that Frito-Lay has proclaimed “solidarity with sexual anarchy” and is fueling America’s “rebellion against God” by spreading “Carcinogenic Secularism”. (The Rainbow Doritos were introduced to benefit anti-bullying projects).

Other political views
For the 2017 election, Lane supported Trump because Trump, according to Lane, would bring “moral, principled leadership”.

As for education, Lane has helpfully explained the purpose of public education (picture a Taliban-sympathetic imam saying this, if it helps): “Once we return to God, He will then attend to the honor of His name. Public education and universities will again focus on the principal component of education: incorporating the character of the Father into our children, thus creating an exceptional and virtuous people. Test scores in education will soar for, ‘The fear of the Lord is the beginning of knowledge.’” (More here)

There is a good David Lane resource here.

Diagnosis: Delusional madman and hysteric fundamentalist theocrat, Lane is also among the most powerful people in the US. Quite simply one of the scariest loons we have covered thus far.
Posted by G.D. at 4:21 AM