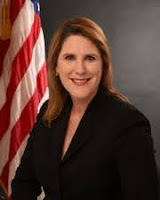 Charmaine Yoest is a writer, political commentator, former president and CEO of the anti-abortion group the Americans United for Life, and a policy analyst and later vice president of the fundamentalist hate group the Family Research Council, as well as senior fellow at Gary Bauer’s organization American Values, a prominent figure in the Council for National Policy and vice president of the Heritage Foundation’s Institute for Family, Community. In April 2017, she was also selected by Trump to serve in the United States Department of Health and Human Services as Assistant Secretary of Health and Human Services for Public Affairs. She is a major figure, in other words. She is the daughter of Janice Shaw Crouse.

Yoest’s official position is that the role of government is to “get out of the way” of families, except for families that aren’t organized the way Yoest thinks they should be or do things she doesn’t fancy, such as single parents or gay couples (Yoest is of course a firm opponent of same-sex marriage and “homosexualist activism”), in which case the government should definitely interfere and break them up.

Yoest is perhaps best known, however, as a fervent and frenetic defender of the thoroughly debunked claim that there is a link between abortion and breast cancer. Indeed, as head of Americans United for Life Yoest helped develop the strategy for a Texas statute that would put up multiple obstacles to abortion services, precisely in the guise of protections for women’s health, a statute that was promptly struck down by the Supreme Court due to the fact that it relied on patently false claims. Of course, Yoest is often reminded that there is a vast scientific literature, and enormous amounts of data, showing that her proposed link simply isn’t there, but any data that goes against what Yoest already believes can be swiftly dismissed, given that the scientific establishment “is under the control of the abortion lobby.” You’ll look in vain for details about what lobby she could possibly be talking about or explanation of how they control or conceivably could control the scientific establishment.

She is almost as vigorously opposed to contraception as she is to abortion, and does not hesitate to lie to (attempt to) bolster her case (nor does she hesitate to pretend to be shocked and outraged and cry “oppression” when attention is drawn to the dishonest tactics she and her organizations use to pressure politicians and organizations to do what she wants – calling it “lack of self-awareness” is far, far too charitable). She has claimed for instance that condoms do not protect against HIV or other sexually transmitted infections (it does), and asserted that contraception does not reduce the number of abortions, saying that to accept this argument “would be, frankly, carrying water for the other side to allow them to re-define the issue in that way”.

Of course, abortion opponents like Yoest see enemies everywhere. The media, for instance – in 2013 Americans United for Life was part of a “March on the Media” to protest perceived pro-choice bias in the media. As an example, Yoest claimed that the media displayed a pro-choice bias in its coverage of Kate Middleton’s pregnancy, because they referred to the future prince as “the royal baby” rather than “the royal fetus.” It’s downright nefarious, but luckily Yoest is paranoid enough to connect the dots and see the patterns. A similar threat is courts coming to decisions she doesn’t like, something that she, like many wingnuts, calls “judicial activism” and interprets as a personal attack.

Yoest is apparently willing to engage in whatever levels of whataboutism it takes to defend Trump. For instance, with regard to the “grab them by the pussy” comment, Yoest said that although she didn’t appreciate Trump’s comments, liberals are being hypocrites for criticizing Trump and not “Beyoncé and Jay-Z, who have lyrics that are replete with this kind of vulgarity.” Yes, she actually thought that what people reacted to was the use of naughty words, and that itself is pretty telling.

There are decent Charmaine Yoest resources here and here.

Diagnosis: Hateful, delusional and fundamentally intellectually bankrupt Taliban-style (and even more obviously: Gilead-style) fundie. Yoest, however, is also something of a star on the religious right, and her amount of influence and power is frightening, especially given the boost she got as a result of president Trump’s need to appeal to the religious right.