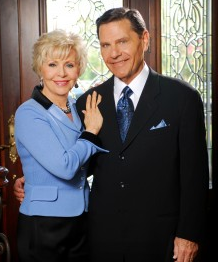 Among the most prominent pieces of New Age lunacy is “The Law of Attraction” – basically, if you really wish for something, you exert positive energy that’ll bring it about – as formulated e.g. by the followers of (the Australian and therefore ineligible for our Encyclopedia) Rhonday Byrne, of The Secret fame, and her disciples (e.g. Michael B. Beckwith, who has been covered). But the idiotic Law of Attraction is not a new idea – in fact, it is the foundation for the “blab it and grab it”-theology (or “prosperity gospel”) made famous by numerous seriously wealthy televangelists. For an introduction, see this. The movement may also be partially to blame for the financial crash.

Among the most prominent prosperity gospel televangelists; Kenneth is also the mentor of Mike Huckabee. Kenneth Copeland is a Texan faith whose show, "The Believer's Voice of Victory", is featured on Paul Crouch's Trinity Broadcasting Network and many local TV stations. He teaches a theology he calls "Word of Faith", also called name it and claim it by critics. He is criticized for taking donations from cancer patients who believed his teachings that God would heal them as a result of donating, for leaving business partners in debt, and for spending funds donated to the ministry on lavish personal vacations in his Cessna jet.

He also sits on the Board of Regents for the Oral Roberts University.

A selection of quotes, discussed by an equally ardent but disagreeing fundamentalist; same goes for this selection. Someone apparently also believes he is actually a 33rd degree Freemason and part of The Conspiracy.

Diagnosis: Professional con artists (both of them), but I have no reason to think they don’t actually believe the rubbish they preach. Kenneth is a master of public relations with lots of powerful friends, so he seems to have some influence but probably little lasting impact.
Posted by chaospet at 1:02 PM