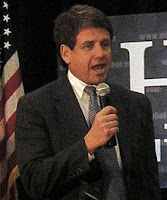 Skipping Mark Farner of Grand Funk Railroad because he is simply too predictably dumb, we offer you one of the most dangerously crazy people in the US: the deranged Michael P. Farris. Farris is a lawyer and founder of the Home School Legal Defense Association (HSLDA) and – most famously, perhaps – Patrick Henry College, a.k.a. “God’s Harvard”, which was founded as “... a Christian institution with the mission of training students through a classical liberal arts curriculum and apprenticeship methodology to impact the world ‘for Christ and for Liberty,’” which means “for Christ” and certainly not for liberty. Patrick Henry College is one of the colleges specially tailored to provide an education for the most deeply religiously homeschooled segment of the population (like here) in a manner that protects the students from any experience remotely resembling a brush with reality. Farris stated that if a student was to write “Goddidit” on a biology test, that would be a correct answer. Students may not drink alcohol, smoke or mess with the opposite sex outside marriage during term time on or off campus, but they are staunch supporters of Bible Bees. Their Statement of Faith for students and staff includes such things as “Satan exists as a personal, malevolent being who acts as tempter and accuser, for whom Hell, the place of eternal punishment, was prepared, where all who die outside of Christ shall be confined in conscious torment for eternity.” That files under the “liberty” part of their mission statement. The “Christ” part is more scary. Needless to say, Patrick Henry College isn’t exactly concerned about accredidation.

One needs also sign a Statement of Biblical Worldview, which commits one to evolution being wrong (here is their take on the teaching of biology), the Big Bang being a conspiracy, and homosexuality being a sin (Farris denounces any conservatives who don’t take a harsh stance on the issue). Their final exams are interestingly similar to the Statements students have to sign at admission, which is reasonable since they won’t learn anything new in between anyways. In 2006 a third of Patrick Henry’s professors resigned, protesting the firing of a library clerk over heresy (believing in baptismal regeneration, more precisely), and criticism of a professor and minister for blasphemously suggesting that any books besides the Bible possessed any truthful or otherwise useful content. They were clearly disciplined for hating freedom. Farris has also threatened to take students expressing views he disagrees with to court – not only expelling them from his school, but taking actual legal action against them. Of course such measures would be unsuccessful, but it tells you quite a bit about what Farris means when he talks about “freedom”.

One of the purposes of Patrick Henry College is to train committed Christians for government posts – many graduates of the College did, in fact, find positions in the Bush administration – and to provide soldiers for the forthcoming religious right revolution.

The purpose of Farris’s other organization, the HSLDA, is to provide legal defense for homeschoolers who abuse their kids for religious reasons (a touching personal story here), and engage in fear-mongering. Farris is the author of several books on homeschooling as well as a couple of novels. The two genres tend, not unexpectedly, to blur a little in Farris’s hands. The theme of his novel Forbid them not is the danger of ratifying the UN Convention on the Rights of the Child, and the fact that it could lead to – mostly conspiracies, of course, but he is right that the UN Conventions could lead to – outlawing religiously motivated violence against children. Swaths of extremist homeschoolers have apparently been scared enough of such a ban on violence toward children to ensure that the HSDLA remains well funded. As expected, Farris has warned his followers that Obama is on the verge of banning homeschooling (also here). The allegation is as much based on evidence as Farris deems necessary to make an accusation of this sort.

In the 1980s Farris and his colleague, one Mike Smith, were personally responsible for removing any certification requirement on homeschooling parents in all states – quite an impressive effort in the fight for evil, thus making room for religious fanaticism to replace all standards of education if parents so wanted it (they can even use Conservapedia as a source). The frightening history of Farris, the HSDLA, and the Taliban homeschoolers is given here, including a scary interview with their director of media relations Ian Slatter (not for the faint of heart).

Diagnosis: Already responsible for one of the greatest damages done to a generation of American kids, Farris is currently actually trying – and to a large extent succeeding – in creating an army of ignorant religious fanatics. Truly scary and extremely dangerous.
Posted by G.D. at 6:47 PM