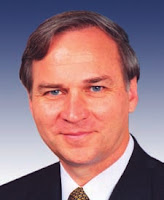 James Randy Forbes is the U.S. Representative for Virginia’s 4th congressional district, and another legendary wingnut madman in Congress. Forbes is a self-appointed general of the culture wars and founder of what he calls the “Push Back Team” (well, it’s really a fundraising team) and the Congressional Prayer Caucus, the purpose of which is to encourage prayer through legislation (and which has, interestingly, made considerable efforts to infiltrate the Science Committee). He is, rather obviously, opposed to laws banning collective prayer led by school officials, and has recently proposed (for the at least a few thousandth time) officially designating the United States as a Judeo-Christian nation (rebutted here) and obtaining an official declaration that “the Holy Bible is God’s Word”.

He has also relatively recently proposed that the State should officially declare that religion is a prerequisite for freedom, reject “the notion that the laws and Constitution of the United States require the exclusion of God from matters of government,” and declare that religion forms “the inseparable foundation for America’s representative processes, legal systems, and societal structures.” No, he doesn’t understand “freedom”, nor the history and origin of the ideas behind the American Consistution, and has precisely the view of which issues are the real and important ones for his country (yes, he has on several occasions led fellow fundamentalists in campaigns to solve all the nation’s problems by – you guessed it – prayer that you’d expect from a crazy village idiot in the Bible Belt. “Only the supernatural hand of God can save America,” says Forbes, though it is unclear from what (and do note how well the claim explains Forbes's views and willingness to take action on political issues). Another example is here (some half-truths and irrelevancies are documented here). You can probably guess what he thinks about those who disagree with the efforts of his Prayer Caucus (yup, they are opposed to the First Amendment – indeed, America itself is on the verge of rejecting God, and thereby the rights encoded in the Constitution, the way Forbes sees it).

In 2011 he introduced his resolution for an annual spiritual heritage week. Nothing unusual for Forbes, of course, who seems to be doing little else. The interesting thing about the resolution, containing as it does a litany of Christian nationalist historical revisionism, is that it is picked pretty much straight out of David Barton (a close ally) – it contains the same kind of lies, misrepresentations, quote-minings, and revisionism (some here). And the really scary thing, of course, is how much influence Barton clearly has over Congress.

As for DADT, Forbes decided to team up with insane Taliban sycophant Harry Jackson to pray, and to attempt to have their bigotry codified into law (Harry Jackson tried the “Martin Luther King would oppose Marriage Equality,” for good measure). It’s not his first attempt to thwart the insidious conspiracies of the LGBT movement, which is, of course, the second most important battle with respect to saving the future of America, after imposing religion through law.

There is a fine Forbes resource here.

Diagnosis: Relentlessly ignorant moron who seems angry that the US fails to use Iran as the good example of government it evidently is. That he has any power at all is scary.