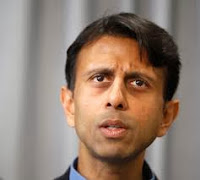 Piyush “Bobby” Jindal is the current governor of Louisiana (he chose the nickname “Bobby” based on The Brady Bunch), hardcore nut and close ally of fellow creationist Rick Perry. For our purposes his most important qualification for an entry in this Encyclopedia is his zealous and continuous war on science. Part of the reason he continues to combat science (and reality) is that he is unable to distinguish it from politics; thus volcano monitoring, for instance, is for  Jindal a form of political work.

In 2008, Jindal signed into law the Louisiana AcademicFreedom Act, a rather blatant attempt to introduce creationism into the classroom (also here; it is worth mentioning that it was bipartisanly sponsored by Democrat Bill Nevers and Republican Frank Hoffman, and that one of its most vocal opponent was Republican representative Dan Claitor). Under the law, teachers are protected from “discrimination” or job loss if they independently decide to introduce material on controversial topics, specifically (explicitly) “evidence” against evolution and global warming (and “human cloning”, which isn’t exactly properly characterized as a scientific theory). There is a good website devoted to this bullshit here.

The bill has already produced its intended results. In 2010 The Livingston Parish School Board, for instance, took steps to insert creationism in their schools. Board member David Tate said: “We let them teach evolution to our children, but I think all of us sitting up here on this School Board believe in Creationism. Why can’t we get someone with religious beliefs to teach Creationism?” Fellow board member Clint Mitchell responded, “I agree … Teachers should have the freedom to look at creationism and find a way to get it into the classroom.” That it is unconstitutional apparently doesn’t matter that much to the zealous wingnuts of rural Louisiana, as long as it’s Jesus. As Jindal himself said: “Bottom line, at the end of the day, we want our kids to be exposed to the best facts. Let’s teach them about the big bang theory, let’s teach them about evolution, let’s teach them – I’ve got no problem if a school board, a local school board, says we want to teach our kids about creationism, that people, some people, have these beliefs as well, let’s teach them about ‘intelligent design.’” In other words, the “best facts” are hardly a selection criterion. (One also wonders what the “less good facts” might be - those facts that don't fit Jindal's preconceptions?)

More recently, Jindal backed a voucher program intended to allow students to transfer to private schools from underperforming public, which was implemented in a manner that deliberately encouraged students to choose schools that emphasize creationism. Instead of funding public schools, Jindal directed the money toward private religious schools. Of course, there was a backlash when the dimwits of the Louisiana Congress discovered that Muslim schools would also be eligible for the funds intended for religious schools (you can see representative Valarie Hodges be absolutely shocked that the bill she signed but didn’t read first would allow anything but Christianity to be taught in publicly funded schools here).

It is also worth mentioning that Jindal was key advisor on education reform to Mitt Romney (also here).

Jindal claims to have personally battled a demon while a student at Brown University. When a member of his prayer group suffering from emotional distress and a skin cancer diagnosis collapsed during a prayer meeting, Jindal and his fellow students did not seek medical aid but began to perform an exorcism instead. The victim tried to flee but was physically restrained by the group. Jindal claims that the exorcism was successful and also miraculously cured the woman’s skin cancer.

There is a decent Jindal resource here. To really blow your irony meters, here is Jindal expressing his concern about the future of the Republican party: “We’ve got to stop being the stupid party.” Words fail, but this is worth a read.

Diagnosis: A wingnut’s wingnut and fundamentalist denialist, who has already abused his position to win a few battles against civilization and reason. Extremely dangerous.
Posted by G.D. at 11:45 AM