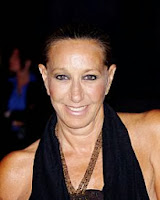 Honorable mention goes to Ted Kaptchuk for his ideas on placebo, but for real, unhinged woo you could do worse (or whatever you want to call it) than having a look at Donna Karan. Karan is a fashion designer, and the creator of the Donna Karan New York and DKNY clothing labels. Apparently her fashion design background and flashy celebrity life makes her, in her own eyes, an expert on self-help and spirituality, and she is not hesitant to offer you health or lifestyle advice based on “ancient oriental wisdom” or suchlike.

Thing is, Karan has the money to back it up. In 2008 the Beth Israel Medical Center, once a respectable institution but quickly becoming a nexus of pure quackery, was eager enough for her money that they gave her a cancer-treatment floor to combine “Eastern and Western healing methods”. As they put it “the Karan-Beth Israel project will have a celebrated donor turn a hospital into a testing ground for a trendy, medically controversial notion: that yoga, meditation and aromatherapy can enhance regimens of chemotherapy and radiation.” Karan’s intentions may have been honorable, but Karan is also in the grip of what she calls “Urban Zen”. Instead of using her money to pay for, you know, more oncologists, “fifteen yoga teachers will be sent to BethIsrael’s ninth-floor cancer ward starting in January to work with nonterminal patients, and nurses will be trained in relaxation techniques." The urban zen project also included a research part. Dr. Benjamin Kligler, the research director in integrative family medicine for the Beth Israel-affiliated Continuum Center for Health and Healing and the research project’s principal investigator, acknowledged that the experiment of yoga teachers and their interaction with patients did not lend itself to the random, double-blind placebo trials favored in the medical world. Solution? “It might be time for the medical establishment to consider a new research model for what he called ‘lifestyle interventions.’” Duh. The whole dismal affairs is pretty well dealt with here.

Apparently Karan is involved in or behind the Huffington-post-based health-care initiative, the Well-Being Forum, where people from Tony Robbins to Deepak Chopra give you health advice.

Diagnosis: The epitome of crazy celebrity fluffpot who is unable to grasp the central distinction between fashion design success and how to understand science. A bad case of Dunning-Kruger fed by wishful thinking. Since she has a lot of money to push into her campaign for quackery, Karan must be counted as quite dangerous.
Posted by G.D. at 1:31 PM