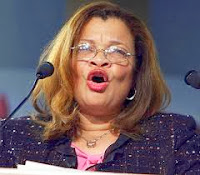 Alveda King is a notoriously obtuse conservative activist and author. She is also the niece of Martin Luther King, Jr., a fact she doesn’t exactly try to downplay, and which both she and her supporters treat as if it somehow conveyed upon her own ideas some special sort of legitimacy. His dream is “in her genes,” she has said repeatedly, insisting that MLK would be supporting e.g. her attacks on legal abortion if he were alive.

King is a particularly virulent anti-gay activist, using her background for all it is worth. “To equate homosexuality with race is to give a death sentence to civil rights. No one is enslaving homosexuals … or making them sit in the back of the bus,” which is not obviously true. But for absolute fanatic crazy it is hard to top this one: “Homosexuality cannot be elevated to the civil rights issue. The civil rights movement was born from the Bible. God hates homosexuality,” which is not even wrong. She dismissed the late Coretta Scott King’s support for marriage equality for same-sex couples and CSK’s reports on MLK’s support for the same, saying “I’ve got his DNA. She doesn’t, she didn’t … I know something about him. I’m made out of the same stuff.” Yes, that’s her analysis of CSK’s evidence.

She likes to refer to things she doesn’t like as “genocide”. For instance, abortion is genocide because African-American women have a higher per capita abortion rate than white women. Homosexuality is genocide as well: “It is statistically proven that the strongest institution that guarantees procreation and continuity of the generations is marriage between one man and one woman. I don't know about you, but I'm not ready to be extinct. And none of us wants to be. So we don't want genocide. We don't want to destroy the sacred institution of marriage.      “ She also asserted that legalizing same-sex marriage in the US would cause a Children of Men-style infertility pandemic and eventual extinction, but did not elaborate on the causal mechanism she had in mind.

King has claimed that her uncle was a Republican, which is a rather silly assertion, and views the
pro-life movement (but, of course, not the gay rights movement) as a “continuation of the civil rights struggle.” In 2010, she was involved in Pro-life Freedom Rides, which began with a protest at a Birmingham, Alabama abortion clinic and ended with a “pro-life service” at MLK’s grave (it drew its name from the 1961 protests against segregation in the American South). It does fit in pretty well with the wingnut attempts to coopt the Civil Rights Movement of which we have seen quite a bit the last couple of years.

There is a fine Alveda King resource here.

Diagnosis: Insidious wingnut bigot whose position of authority is, to put it diplomatically, not earned through the strength of her reasoning abilities.
Posted by G.D. at 12:19 PM