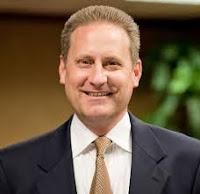 Not to be confused with rabid British creationist and IS-style fundamentalist Stephen Green, our Steve Green is the CEO of Hobby Lobby, an important example of Corporate Christianity. The Burwell v. Hobby Lobby court case should be familiar enough, but it is worth emphasizing that Green himself is a fanatic religious fundamentalist. Green has for instance spent a fortune
developing a Bible curriculum for use in public schools. Of course, to avoid problems with, you know, Constitutional issues, Green marketed his curriculum as a “nonsectarian Bible curriculum” that would cover the history (with an emphasis on Biblical archaeology, which must at present be considered a pseudoscience), impact and story of the Bible in a non-proselytizing way. Of course, Green really wanted the exact opposite; the curriculum is designed precisely to save souls for Jesus, and since he is a frothing fanatic Green has had some problems refraining from spilling the beans, having for instance explained that his goals for a high school curriculum were to show that the Bible “is true,” that it’s “good” and that its impact, “whether (upon) our government, education, science, art, literature, family … when we apply it to our lives in all aspects of our life, that it has been good.” You see, “this nation is in danger because of its ignorance of what God has taught,” and that’s precisely what Green wishes to remedy: “There is (sic) lessons from the past that we can learn from the dangers of ignorance of this book. We need to know it. And if we don’t know it, our future is gonna be very scary.” The fact that Green has a backstory of partnering with David Barton to produce full page newspaper ads full of precisely the mined and misleading quotes Barton has become so famous for should have been a hint. And yes, the curriculum is precisely a fundamentalist Sunday school curriculum that treats Adam and Eve as historical figures, advocates young earth creationism and claims that science support the creation story in Genesis.

The first target for the curriculum was Mustang school district in Oklahoma, a few miles from the company’s corporate headquarters. The district eventually dropped the curriculum, though, apparently since Green failed to provide them with an opportunity to review the final version and denied their request to pay the legal expenses in the event of a lawsuit. State senator Kyle Loveless later filed a bill that would protect school districts using Green’s curriculum from legal action by attempting to place a “loophole” in the law that would let public schools teach that the Bible is literally true: The idea was apparently to declare a state of emergency and that presenting the Bible as literally true in public schools was “immediately necessary for the preservation of the public peace, health and safety.” The bill doesn’t seem to have had much success.

Diagnosis: Zealous anti-science fundamentalist, and Green has got the money to back up his battle against decency and civilization. Dangerous
Posted by G.D. at 2:59 AM