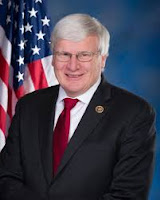 A.k.a. Rick Santorum’s “soul mate” (according to himself)

Oh, the state legislatures (again). Glenn Grothman is a village idiot state senator from Wisconsin who managed to serve 22 years as a representative/senator before he – instead of being laughed out of the house – got himself elected to Congress in 2014.

As you’d expect, Grothman has weighed in on social issues with little insight but plenty of dumb. Gay rights is an important one, of course. Grothman opposed a provision in a 2010 Wisconsin sex education law that prohibited teachers from promoting bias based on sexual orientation: homosexuality shouldn’t be mentioned at all in schools beause the instructors who lead these talks would invariably have an “agenda” to persuade students to become gay since homosexuals “would like it if more kids became homosexuals,” and that would eventually lead to divine punishment.

He was also concerned about what God might think of the United States in light of more recent government efforts to fight discrimination based on sexual orientation – in particular the government’s ungodly opposition to Uganda’s draconian anti-gay laws – and said that Republicans, conservatives, and church leaders were not confronting the issue of homosexuality and were therefore “losing the issue” (huh!). It’s also the end of America: “We had such a great country in the relatively recent past. Now America, supposed to be the light of the world, instead we’re the light going in the opposite direction.” Indeed, same-sex marriage is an insult to those who fought in the Civil War because those soldiers were fighting to make America more Christian. Yes, he said that.

In a 2012 press release Grothman argued that Kwanzaa is not a real holiday but invented by people who intended to destroy America: “almost no black people today care about Kwanzaa – just white left-wingers who try to shove this down black people’s throats in an effort to divide Americans” (cause the only reason for disagreeing with Grothman is that you wish to divide America). Instead, we should “treat Kwanzaa with the contempt it deserves before it becomes a permanent part of our culture.” Meanwhile Martin Luther King Day is “an insult to all the other taxpayers around the state.” (Of course, Grothman has also advocated a seven-day work week.)

He supported Governor Scott Walker’s decision to repeal the Wisconsin Equal Pay Act, claiming that “once you break it down by married and unmarried, the differential disappears.” That’s of course false, but Grothman explicitly addressed the studies showing that the claim is false by rejecting them and pointing out that “you could argue that money is more important for men.” In 2012, he introduced a state Bill 202, which would have repealed the Equal Pay Enforcement Act and a bill that would require the state’s Child Abuse and Neglect Prevention Board to officially label single parenthood “a contributing factor to child abuse and neglect,” saying that the “Left and the social welfare establishment want children born out of wedlock because they are far more likely to be dependent on the government.”  You see, it is all a conspiracy; the government is secretly trying to “destroy the nuclear family”. Grothman tried to argue that out-of-wedlock birth rate is the “choice of the women,” who should be “educated that this is a mistake.” And when shown statistics about the high number of pregnancies that are unintended, Grothman dismissed them by saying that many women are “trained” to lie and say that their planned pregnancies are actually unintended. It is really part of a “war on men” (“our country is not going to survive if we continue this war on men”), in fact, conducted through welfare and diversity efforts – so, a war on white men, to be more precise: In a 2009 press release on diversity programs at the University of Wisconsin, he precisely raised the question: “Does the university hate white men?”

Meanwhile, he has called Planned Parenthood “the most racist organization” in the country because it is “aggressively promoting” sex-selective abortions to Asian Americans because such abortions are really popular among that group. No, he doesn’t seem to have a very sophisticated understanding of “racism”. He recently argued that Planned Parenthood’s services aren’t necessary because “as a guy” he has plenty of other health care options in his home state.

Given his proclivity for insane conspiracy theories it is little surprise that he claimed, after the 2012 election, that President Obama and Sen. Tammy Baldwin both won their elections due to fraud (he also suggested that he was eventually going to be arrested for opposing Obamacare and that the Council on Foreign Relations – a shadowy, powerful and evil organization – may be out to get him). But at least he has admitted that the point of voter ID laws is not to prevent voter fraud.

Another active conspiracy is environmentalism. Climate change “doesn’t exist,” according to Grothman, and “this environmental stuff, this is the idea that is driven by this global warming thing. Global warming is not man-made and there is barely any global warming at all, there’s been no global warming for the last twelve or thirteen years” (and let us emphasize: anyone who uses that gambit and believe it is so stupid and malinformed that they shouldn’t be trusted with opening doors without assistance). Indicative of his powers of observation, Grothman’s laments the “fact” that few Republicans are “stepping up to the plate and saying, ‘look, this global warming stuff is not going on.” (The shortage of scientists doing so concerns him less, since he is unable to see science as anything but a political game anyways).

During the 2016 primaries Grothman endorsed Ted Cruz, ostensibly because Ted Cruz was the only candidate who can protect us from single moms having anchor babies (presumably since it's the single mothers that are guided by Satan to destroy America; marriage saves them).

Diagnosis: Yes, a crazy, bigoted and obtuse wingnut. But Grothman is first and foremostly a deranged conspiracy theorist, of the kind that should really be relegated to writing rants with curious font choices and color combinations for Red Ice Creations.
Posted by G.D. at 2:33 AM