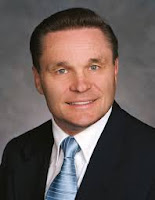 More delusional derangedness in the state legislatures, this time in Minnesota. Glenn Gruenhagen has been serving as a representative since 2010, and has been a vocal proponent of climate change denialism and associated conspiracy theories. According to Gruenhagen, climate change is a “complete United Nations fraud and lie,” and as a source he cites “the latest facts from CPAC,” no less, which “show that in the last sixteen years there’s been no global warming.” Yeah, that one.

Oh, but he is also into gay rights conspiracies, as you probably expected. According to Gruenhagen, homosexuality is a “sexual addiction” and an “unscientific lie” (keep in mind Gruenhagen’s reference to CPAC for his scientific facts). On what grounds is it unscientific? “The human genome map was completed in 2003. There is no gay gene. Okay?” It’s interesting to ponder what else would be “unscientific lies” by that criterion. Gruenhagen dismissed Alfred Kinsey’s work on the grounds that he was a “filthy, perverted unscientific liar” and called for all of his research to be destroyed. He has also asserted that “the concept of sexual orientation was started by Sigmund Freud … he’s a pervert, he’s a moron in my opinion, and I don’t believe in anything that he came up with.” Granted, “in my opinion” isn’t much worse as a source of scientific evidence than CPAC. He has also urged his constituents to “resist the implementation of the gay agenda in public and parochial schools,” and has claimed that in Massachusetts there have already been cases where “citizens who would not succumb to politically correct speech have been charged with hate crimes.” That information (false, of course) he got from the anti-gay organization MassResistance, Brian Camenker’s group. Which may, in fact, be an even more ridiculous source of “facts” than CPAC.

Diagnosis: Moron who tries to weigh up for his lack of intellectual clout with passionated hatred, paranoia, conspiracy theories and bigotry. Which is pretty common, but never a particularly pretty sight.
Posted by G.D. at 4:19 AM