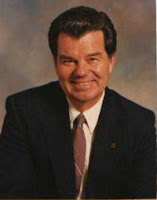 Carl Edward Baugh is a young earth creationist who is most infamous for claiming to have “discovered human alongside dinosaur footprints near the Paluxy River in Texas”. Yes, Baugh is the big promoter of the infamous (fake) Paluxy footprints, and he still believes they’re genuine.

Apart from that he is familiar as a national television host who purports to present “science” supporting creationism on the program Creation in the 21st Century (Trinity Broadcasting Network). Pure pseudoscience, of course, and Baugh’s mistakes (which are plentiful) aren’t always honest mistakes. His educational credentials are … somewhat shaky as well – even his theology degree seems to be an honorary degree from an unaccredited institution, his “Ph.D”s are perhaps even more ramshackle than Kent Hovind’s, and the institutions (if possible) perhaps even shadier.

In 1984 Baugh instigated the Creation Evidence Museum, a forerunner for Answer in Genesis’s Creation Museum in Kentucky (nicely reviewed here), in a double-wide trailer in Glen Rose near Dinosaur Valley State Park, to promote creationism (he has later updated the architecture; there is a hilarious account of a visit here). All the exhibits are junk, of course, and pride of place goes to the forgeries – the most famous being the Paluxy footprints (also here), though other forgeries have been identified as well, such as purported dinosaur claws that turned out to be crocodile teeth. Now, just to emphasize; Baugh actually really does make fake fossils and present the fakes as the real deal. As for the mantracks, when scientists attempted to investigate his claims he couldn’t even get the story about their discovery straight, and it has been reported that when Baugh bought his Moab skeleton (oh, yes – he’s got those as well) he knew that the bones had already been dated at 200–300 years. Didn’t prevent Baugh from claiming that the bones were found in Cretaceous deposits (guess Jesus looked another way when he made that claim). And then there is the Ordovicean hammer (or “London Hammer”), and this footprint.

Among an assortment of other claims, Baugh has also argued that “hexagonal water”, called “Creation water”, is capable of healing. Sort of to close the circle of lunacy, I guess.

Even archcreationist loonie Ken Ham has been critical of Baugh’s footprints, but Kenneth Copeland appears to be a fan – as is the National Council on Bible Curriculum in Public Schools, an organization lobbying for getting creationism into education, which is more worrisome than Copeland’s endorsement since the organization seems to be somewhat successful.

Baugh was first and foremostly immortalized by the Daily Show in 2001. His appearance in the legendary Charlton Heston disaster “The Mysterious Origin of Man” didn’t hurt either.

Don Patton, a close associate of Baugh’s who also leads the Metroplex Institute of Origins Science (MIOS) near Dallas, deserves a brief mention as well as one of the most staggering quote-miners the world has yet seen, including an ellipsis (...) that spans 4 whole chapters of Origin of Species (no direct link to it, but you can access it from here)), and as an ardently delusional PRATT-regurgitator.

Diagnosis: Raving clodhead for which the evidence would scream "fraud", but Baugh so caught up in wishful thinking that he is unable not to believe in his own falsehoods and deliberate forgery. Moderately dangerous, since his insanely ignorant, idiotic ideas seem to be frighteningly widely distributed.
Posted by G.D. at 10:29 AM