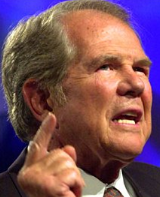 Robertson is a founding member of the Taliban satellite known as the 700 Club, a Christian ultra-extremist terrorist group funded by TV telethons. When people call in, Robertson will cure them for whatever illness they may have by hollering his ever-faithful servant, God, and make Him perform the trick – or to smite down people Robertson doesn’t particularly fancy. Robertson views himself as God’s personal messenger on earth (read that as “Pat da boss, Jesus his muscle man”), and claims to have direct contact with the prophets (yes, those prophets). This is a source of information Robertson uses to predict disasters that will happen to people who don’t behave the way Robertson thinks God ought to want people to behave. He often makes his predictions after a disaster has already struck, but there are the annual exceptions (we are still waiting for Orlando to be destroyed by a meteor). In fact, Robertson strikes one as a slightly eccentric, utterly delusional and repugnantly evil version of the wizard Tim: “Hurricane, In the name of Jesus I take authority over you and command you to change course. In the name of Jesus I command you to turn away from Virginia Beach now. You will turn south and then east and strike the wicked godless heathen land of Cuba instead. Amen.” Chants Pat. He also prophesied the end of times to happen in 1980, 1982, 1985, 1996 and 2007. His 2012 predictions are here (he also has first-hand testimonial from Jesus that Obama will disintegrate America, the only remedy being prayer and sending Robertson money).

For example, 9/11 is really the responsibility of the ACLU and abortionists, and the Haiti earthquake can obviously be blamed on the Haitians’s old pact with the devil. In fact, Robertson is a full-scale conspiracy theorist; his claim that Obama is directly behind the Occupy Wall Street protests is just one example among many. In 1982 he published a book called “The New World Order” which dealt with, you know, the new world order, and relied heavily on the writings of certified madman Eustace Mullins as well as (allegedly – though Cumbey is not an entirely trustworthy source) plagiarizing Constance Cumbey. Robertson’s expertise on matters meteorological and geological is described here.

Robertson, whose views tend toward the anti-semitic, also claimed that Ariel Sharon suffered a stroke because of his ungodly leniency toward the Palestinians. That did not go down particularly well with the Israeli government, but then, despite his support of Israel, he doesn’t think much of Judaism and does claim that all Jews must convert to Christianity – in order to not prevent but usher in the end times. Robertson has also claimed that feminism leads to witchcraft, infanticide and gay socialism, and that “Many of those people involved in Adolph Hitler were Satanists. Many of them were homosexuals. The two things seem to go together,” though he didn’t provide any sources for the claim. You can find more anti-gay quotes here. A novel one is: “[Gays] want to come into churches and disrupt church services and throw blood all around and try to give people AIDS and spit in the face of ministers.” And there is, of course, this one.

Robertson, not being satisfied with his role as a fire and brimstone prophet, faith healer, Televangelical and media mogul (he also founded the Christian Broadcasting Network, which is currently run by his son Gordon), is also a dietary and healthcare advisor and lifestyle consultant – he is famous for bragging about how he leg-pressed 2000 pounds, all because of his wonderful special protein shake.

But really, Robertson is without doubt one of the most repugnantly evil people alive. For example - The 700 Club runs the charity called Operation Blessing. Operation Blessing is advertised as helping people in need in 3rd world countries. That, however, is just for telethon purposes. In reality, Operation Blessing is a front for Robertson's multifarious crimes against humanity in Africa. In the 1990s, for instance, Operation Blessing used money collected to help refugees in Rwanda to finance planes transporting diamond-mining equipment for the Robertson-owned African Development Corporation, a venture Robertson had established in cooperation with Zaire's then-dictator, Mobutu Sese Seko. Seko was an old friend of Robertson’s – as was Liberia’s dictator Charles Taylor, whom Robertson tried to help by swaying the American government because Robertson owns a gold mine in Liberia. Robertson also supported Gbagbo, by the way, presumably because he was of the right religion. Although he hasn’t explicitly hearted Anders Breivik, this comes dangerously close.

Robertson’s general level of insanity can be discerned from this selection of quotes. For instance: “Just like what Nazi Germany did to the Jews, so liberal America is now doing to the evangelical Christians. It's no different. It is the same thing. It is happening all over again. It is the Democratic Congress, the liberal-based media and the homosexuals who want to destroy the Christians. Wholesale abuse and discrimination and the worst bigotry directed toward any group in America today. More terrible than anything suffered by any minority in history.” No, Mr. Robertson, I don’t think you are entirely accurate here, and I don’t Christians count as a “minority” in the US. But then, Robertson is legendary when it comes to failed analogies. And failed reasoning.

And his views on evolution? “I'd like to say to the good citizens of Dover: If there is a disaster in your area, don't turn to God, you just rejected him from your city.”

There’s another (slightly overlapping) list of quotes here. And there’s of course this one. In fact, Robertson has said rather a lot of stupid things. To reach something close to the bottom, you can read about him interviewing James Inhofe here. Or watch his reaction to the fact that America is taking steps to prevent gay people from getting killed around the world.

Here is Robertson’s cohost Kristi Watts not quite understanding the Establishment Clause.

Diagnosis: He’s Pat Robertson! What more diagnosis do you need?
Posted by chaospet at 2:21 AM