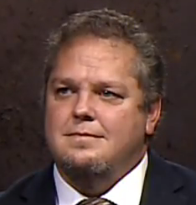 Diagnosis: Relatively insignificant loon, but apparently a rather aggressively bigoted one.
Posted by chaospet at 1:04 PM No comments:

Lyndon LaRouche is a legend. Perennially running for president, LaRouche manages to be a wingnut/moonbat on the radical left and the radical right at the same time. He has a severe messiah complex and runs his organization like a fundie cult, and is – fortunately – insane enough to be rather toothless.

So why should you vote for LaRouche (given that he – as he certainly will – runs for president again)? Among the issues LaRouche is firm on, and that no one else seems to deal with effectively are (more details here):
- Using tactical nukes to build a canal across Africa to solve the world's water crisis.
- Break the Satanist conspiracy between Henry Kissinger (and/or George Soros), the Queen of England, ADL, Greenpeace and the World Wildlife Fund that controls the world’s drug trade.
- Avoiding the imminent global economic collapse (which has been immediately around the corner since the 60s, apparently). His suggestions on how to deal with it are rather diffuse.
- Banish rock & roll (especially the Beatles), which is a tool used by British Intelligence to control American minds. In fact, according to LaRouche, British liberalism is the main threat to the world at present, and they are secretly working to take over the world and bring it back to the dark ages (other conspiracy theories are dismissed as British propaganda).
- Remove any trace of the politics of the betrayer Barack Obama (LaRouche’s followers have compared Obama to Hitler, but were staunch supporters of John Kerry); in fact LaRouche has called for the impeachment of Obama.
- Dismiss and end the propaganda for the fraudulent idea of global warming (a conspiracy).
- Drawing on the resources of the already existing (worldwide) LaRouche Youth Movement to do, well, whatever youth movements do? (It really exists, btw, and bears all the hallmarks of a cult; the spokesperson is one Barbara Boyd and it seems to be led by Lakesha “Kesha” Rogers, a certified nutcase.

LaRouche was originally a Trotskyist (under the name Lyn Marcus), instigating several labor strikes among students during his leadership of the sectarian leftist National Caucus of Labor Committees (LaRouche promoted the use of physical violence, however, against his competitors in the Communist Party). He established relations to the extreme right – e.g. Willis Carto’s Liberty Lobby – during Reagan (particular over drug policy and staunch opposition to environmentalism). He eventually turned from (some semblance of confused) Marxism to anti-Semitism. This quote, from 1978, is, uh, interesting: “America must be cleansed for its righteous war by the immediate elimination of the Nazi Jewish Lobby and other British agents from the councils of government, industry, and labor" (more quotes here).

He also erected a quite wide-ranging intelligence network and a surprisingly large international organization (or somewhat militia like cult) with ties to a frighteningly many questionable regimes, including South Africa’s apartheid regime and Saddam Hussein’s Ba’ath party. He also achieved a certain success in the 80s, before being imprisoned for tax evasion (sharing a cell with Jim Bakker). LaRouche’s followers are known to be among the most persistent at comparing Obama to Hitler. They’re still running a variety of fronts and publications (including the crackpot science cesspool “21st century Science and Technology”, known in particular for its rabid and completely unscientific papers arguing (ranting) against global warming). This one is worth a visit.

More here. This one seems to have gone a little over the top, however.

Diagnosis: Schizophrenic, megalomaniac raving lunatic who seems to wish to establish a socially conservative, fiscally socialist political system based on cult-like worship of the strong man (himself). That political system has been tried before. Fortunately LaRouche doesn’t stand a snowball’s chance in hell of implementing it in the US, despite the fact that he has a frighteningly large number of followers.
Posted by chaospet at 1:09 AM 2 comments:

Robert Lanza is an American Doctor of Medicine, scientist, Chief Scientific Officer of Advanced Cell Technology (ACT) and Adjunct Professor at the Institute for Regenerative Medicine, Wake Forest University School of Medicine. He’s got his credentials in order, and – as his Wikipedia article also emphasizes (exclusively) – he has done some important research on and development of stem cell technology. He is, in other words, one of the good guys.

In his spare time, however, Lanza likes to fight reality – he seems to be something of a megalomaniac – by writing tripe for – you guessed it – Huffington post and by developing his own, shall we say controversial, ideas about how the universe hangs together (his book “Biocentrism” received some attention). In these he deploys the worst kinds of quantum woo and bad math and enters into a problematic relation with mereology (the fallacy of division seems to be one he never quite managed to grasp). A good example is the, uh, fascinating and dubiously coherent “What happens when you die? Evidence suggests time simply reboots”.

Humans never die, you see, because we are only energy, and our constituents only get rearranged (in other words, Lanza got stuck on Goodman-style extensional mereology and hardcore nominalism – he also seems to gleefully adopt while failing to recognize the solipsistic element of his view). He backs this up by – of course – further babble about how reality works at the quantum level. More here.

You’ll read gems like “Biocentrism tells us space and time aren't objects -- they're the mind's tools for putting everything together” or “Quantum theory ended the classical view that particles exist if we don't perceive them.” Knowing nothing about the literature on consciousness, Lanza asserts that consciousness is a mystery to physics and draws, from that assertion, the conclusion that the universe is (at least in a sense) created by the mind. More here. Thing is, you need this idea to understand why the physical constants are so fine-tuned for life (ah, the anthropic principle so beloved by creationists, but Lanza does at least not go down that road): “At the moment, there are only four explanations for this mystery. One is to argue for incredible coincidence. Another is to say, "God did that," which explains nothing even if it is true. The third is to invoke the anthropic principle's reasoning that we must find these conditions if we are alive, because, what else could we find? The final option is biocentrism pure and simple, which explains how the universe is created by life. Obviously, no universe that doesn't allow for life could possibly exist; the universe and its parameters simply reflect the spatio-temporal logic of animal existence.” I hope anyone with a background in probability theory or critical thinking can spot the delightful plethora of fallacies invoked in that paragraph.

He also reacts to dismissals in a fairly typical crackpot manner.

Yup. Respectable scientist Lanza’s alter ego is a mixture of Deepak Chopra and Denyse O’Leary (and Lawrence LeShan) – without the religious insanity, admittedly, but with enough crackpottery to not sustain a perpetual motion machine. It is, frankly, not a completely uncommon situation for otherwise respectable scientists.

Diagnosis: Crackpot, and as cranky as they come (despite his real and respectable daytime job). Seems to have gained some prominence in the Chopra-inspired community.
Posted by chaospet at 12:59 AM 9 comments:

Langan is an American autodidact whose IQ has (been reported by various media sources to have) been measured at between 195 and 210. Typical fare for less serious news outlets, Langan, who has been called “the smartest man in America”, rose to prominence in while working as a bouncer on Long Island. He subsequently developed his own “theory of the relationship between mind and reality” (note the curious formulation) which he calls the “Cognitive-Theoretic Model of the Universe (CTMU)” (the fact that CTMU had a Wikipedia entry was cited by John Farrell as an example of Wikipedia’s untrustworthiness). Langan has been quoted as saying that "you cannot describe the universe completely with any accuracy unless you're willing to admit that it's both physical and mental in nature" and that his CTMU "explains the connection between mind and reality, therefore the presence of cognition and universe in the same phrase". He also claims that "you can prove the existence of God, the soul and an afterlife, using mathematics."

I guess most readers see where this is going. Langan apparently dropped out of university because he was too smart. Gladwell reports that while his work on the CTMU is profound (i.e. “can-be-understood-by-perhaps-only-a-handful-of-people” profound, a.k.a. “it-both-is-and-is-not” Buddhist profound), “without academic credentials, he despairs of ever getting published in a scholarly journal”. Uh-oh. Apparently Gladwell is unfamiliar with the peer review process. CTMU seems, by the way, to be just a mixture of Berkeley’s idealism with some woo-processed, half-baked physics and complete mathematical ignorance plastered onto it. It is truly silly.

Langan is a fellow of the International Society for Complexity, Information, and Design (ISCID) – yes, that’s Dembski’s group, and it promotes intelligent design creationism (the society’s journal (newletter) is also the only place where Langan’s musings have been published). Langan even contributed a chapter to Uncommon Dissent (edited by Dembski); he has elsewhere said that he “believe[s] in the theory of evolution” as “one of the tools used by God to create mankind”. Fair enough. The quote continues thusly: “Mankind is then a participant in the creation of the universe itself, so that we have a closed loop. I believe that there is a level on which science and religious metaphor are mutually compatible” and “just as the mind is real, reality is in some respects like a mind. But when we attempt to answer the obvious question "whose mind?", the answer turns out to be a mathematical and scientific definition of God”. Spot the argument from word-salad here. And by nonsense-introduction, Langan points out that “[t]his implies that we all exist in what can be called "the Mind of God", and that our individual minds are parts of God's Mind.”

So there you have him, “the smartest man in America”. Profound like a mid-level Buddhist monk with +2 confabulation skills causing “awe” when you fail your intelligence or wisdom saving throw.

Diagnosis: Super-crackpot. This is really a sad story about media exploitation. Fortunately, Langan probably doesn’t have much impact (as with most celebrities of his ilk, the interest soon dies out).
Posted by chaospet at 1:59 PM 7 comments: