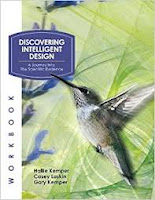 Who are Gary & Hallie Kemper? Well, at least no one had heard about them until their book Discovering Intelligent Design was touted by the Discovery Institute’s pro-creationism blog. Apparently the book was published by the Institute’s in-house vanity press, the Discovery Institute Press, and it was presented as suitable “supplementary materials” for Louisiana science class, since Louisiana, thanks to the Louisiana Science Education Act, allows distributing creationist tracts in biology classes. The book is described as “the first full curriculum to present the scientific evidence for intelligent design in both cosmology and biology in an easy-to-understand format. The curriculum includes a textbook, a workbook, and a DVD with multimedia video clips that are integrated into the readings.” So, it’s yet another piece of creationist rhetoric aimed at the lay market. We’re still waiting for the science from the Intelligent Design creationists.

The Kempers themselves are apparently homeschoolers – which ought to make their whole marketing campaign look a bit weird – and have no discernible background in science. However, apparently the Discovery Institute’s own “research coordinator” (oh, wee), the infamous Casey Luskin, was involved, too. The publication of the book – which appears to contain all the usual creationist canards – was subsequently ranked by the Discovery Institute as one of their 10 “great triumphs” of 2013. It is telling that triumphs for Intelligent Design creationists don’t mean scientific breakthroughs or anything related to research or discovery, but outreach results, once again demonstrating that the point isn’t to test their theory, but to get it taught in public schools.

Diagnosis: Fundamentalists and non-scientists. Other than that they’re pretty darn obscure, and their impact is probably negligible. Really: WTF is this?
Posted by G.D. at 3:11 AM