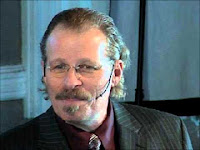 L.A. Marzulli is something of a legend in conspiracy circles, having made his appearance in numerous poorly produced documentaries and sensationalist TV and radio shows aimed at the most gullible among us. His deranged rants have also been extensively published in venues that publish such stuff (such as the WND, who refers to him as “Reporter and researcher”). Precisely what Marzulli thinks is sometimes a bit difficult to determine, but he seems bent on adopting whatever crazy combination of conspiracy theories, deranged religious fundamentalism and pseudoscience he encounters. Aliens are a big part of it, as is the return of Jesus. And apparently the theory of evolution is false. In general, the general tenor seems to be a perceived battle between Jesus and his devout followers on the one hand, and a Satanic horde of ancient alien lizard people, demons, the Illuminati and the UN on the other. Apparently aliens built piezoelectric teleporters in Peru in prehistoric times, and people with unusual head shapes are aliens and signs of imminent End Times. That kind of stuff.


Marzulli also hosts something called Acceleration Radio, which actually seems to enjoy some listeners. He is also the author of the Nephilim Trilogy; Politics, Prophecy & the Supernatural and the Alien Interviews. Cult leaders John and Glenys Darnell in Australia (truly scary people) seem to be heavily influenced by Marzulli’s teachings, for instance.

Not only is Marzulli’s insanity popular in fringe conspiracy circles; he also enjoys quite a bit of an audience at the intersection between the Tea Party and the religious right (ok, that would presumably count as a fringe conspiracy circle). In 2013, for instance, he was a keynote at the Pikes Peak Prophecy Summit with the talk “On the Trail of the Nephilim: The Mysterious Skulls and Skeletons of Peru”. Other keynotes included Jonathan Cahn (“The Harbinger Continues & The Mystery of the Malkosh”), the WND’s Joseph Farah (“After the Harbinger: The Prophecy Continues”), no less, Stanley Monteith (“Secret Agenda”), Chuck “Peanut Butter Argument” Missler (“The Denizens of Metacosm”), Gary Stearman (“First Trump Last Trump: Defending the Rapture”), Mark Biltz (“Signs in the Heavens: Blood Moons Are Coming to Israel”), Bob Cornuke (“Biblical Archaeology: A Police Investigator’s Perspective”) and Bill Koenig (“The White House’s Role in Israel and the Middle East”).

Diagnosis: Utterly deranged religious fundamentalist who has also adopted most of the whale.to-style conspiracy theories you could possible imagine – one step more deranged than the Alex Joneses of the Internet, in other words. Marzulli is nevertheless loud enough to have managed to attract an audience, but although he is perhaps not completely harmless, his impact zone remains fairly limited.
Posted by G.D. at 3:18 AM