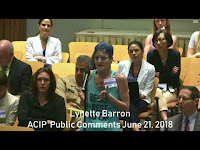 The Advisory Committee on Immunization Practices (ACIP) is the committee that makes decisions regarding the CDC-recommended vaccine schedule. Antivaxxers predictably don’t like the ACIP, or any scientist on it, and promptly assert, without evidence, that these scientists are in the pockets of Big Pharma. There is even – or at least used to be – a facebook group called ‘Inundate the CDC ACIP Meetings’ that tries to encourage wild-eyed conspiracy theorists to swamp said meetings.

The FB group is run by one Lynette Marie Barron, who describes herself as an “Advocate & Activist for Vaccine Truth. Radio Show Host & Business Owner!” and an “Advocate & Activist for Medical Health Freedom”, as well as a “Mother fighting for the lives of our children against Vaccinations”. Barron is apparently the mother of two daughters she describes as “vaccine injured”, and is in general as crazy as they come, tirelessly promoting every piece of antivaccine misinformation she comes across – she retweets Mike Adams, for instance – much of it presented on the YouTube channel for her Forsaken Generation radio show. She did, for instance, do an interview with the VAXXED crew, and the posts on her FB page are the usual lovely bunch, including thinly veiled threats of violence (e.g. the lovely post by one Thomas Milcarek reported here.

Barron also runs a group called Tough Love, which has campaigned against bills to remove religious exemptions for vaccines in Alabama, and more recently – but of course – campaigned to counter what Barron describes as “fearmongering” from the authorities regarding the severity of the coronavirus. The fearmongering is, as Barron sees it, ostensibly a ploy to take away people’s rights (“I think there's a much bigger agenda here,” says Barron, because of course there is).

Diagnosis: Wild-eyed, loud, angry and utterly, completely confused conspiracy theorist. But when thoroughly confused people get angry – and there are lots of confused and angry people around now – they can become dangerous, and Barron, unfettered as she is by the constraints of reality, is pretty dangerous, at least at a local level.