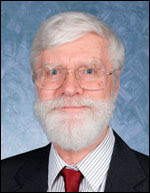 Russell Humphreys may look a little like Santa, but he is in reality a hardcore young earth creationist affiliated with the Institute for Creation Research, and their scientific alibi – Russell is a physicist, and a genuinie one, with a decent CV. But nothing on the CV is at all related to his main area of study at the ICR, which is reconciling reality with young earth creationism (not hard to guess which of them (according to Russell) has to go when tensions arise).

His main topic is reconciling the distance of the stars (the distance they have to travel), the speed of light and a young earth. You may sense some serious crackpottery coming up, and sure enough – Russell delivers: “White hole cosmology”. Short story: the Earth was created within a black hole, with the associated gravity induced time dilation effects, thus Earth's time runs at a different rate than the rest of the universe. It is generally not considered scientifically viable. More fascinatingly desperate reconciliationism here.

At least it is slightly more sophisticated than the Omphalos hypothesis. You can explore the topic of creationist geophysics further here. But maybe Russell and other physicists just started with different and equally valid presuppositions?

Diagnosis: A virtually unblemished illustration of the very idea of crackpottery, Humphreys is another good example of the compartmentalizing abilities that follow in the wake of rabid religious fundamentalism. His impact is unknown, though he is cited a lot by Answers in Genesis.
Posted by chaospet at 12:04 PM