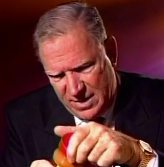 A.k.a. The Peanut Butter Man
One of the most celebrated confirming instances of the Salem hypothesis, Chuck Missler is also a prominent Christian Zionist with ties to the far right Patriot movement, and an author. He and co-author Hal Lindsey plagiarized and published whole chunks of other people’s books back in the 90s before being called out on it. Some of the books, such as “Alien Encounters: The Secret Behind the UFO Phenomenon” and “Cosmic Codes: Hidden Messages From the Edge of Eternity” look rather enticing given the evidence for Missler’s general reasoning skills (Missler seems to be a William Cooper fan, but I might be mistaken).
He is by far most famous for the peanut butter argument against evolution. Whatever you do, you must see the video (also here). Basically the argument is that since life does not evolve spontaneously in sealed jars of peanut butter, it follows that evolution is wrong, and therefore Jesus. The value of the argument is probably that it is wrong on so many levels that it is almost impossible to pry them apart. It starts by defining evolution as “matter + energy = life” (huh?). Hence, it deductively follows that light shining on a peanut butter jar should spontaneously create life in that jar. Lots of people open jars of peanut butter every day, and this has never happened, therefore Jesus (the way Missler conceives of him) and the Rapture is drawing close. QED. It is closely related to the Banana Argument.
The argument is worthy of this list (enjoy).
Diagnosis: Terminally bewildered bozo vying with Ray Comfort for the title of “dumbest creationist”. Impact unknown.
Posted by chaospet at 11:15 AM