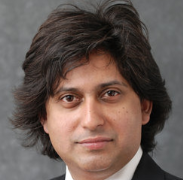 The intolerably silly fluffmeister Pillay is in many ways Deepak Chopra’s even more severely critical thinking-challenged herald. Pillay is a self-billed certified master coach, psychiatrist, brain imaging researcher and speaker, and likes to demonstrate a profound inability to spot fallacies or evaluate science. He has actually cited Dean Radin's “research” as “evidence” for “distant healing”.

Although he likes to emphasize that many of his friends are rational and intelligent (though he wouldn’t be able to recognize rationality if his life depended on it) he himself displays a profound hatred for rational thought, science, evidence and, indeed, anything short of complete, unqualified gullibility. He is most famous for one of the most idiotic over-the-top appeals to nature arguments ever made, in his essay (Huffpo – where else) “Why rational thinking is not all it’s cracked up to be”, where he observes that people often don’t use rationality (but rather emotions) in their decision-making and, instead of concluding that people should perhaps be a little more careful, he concludes that since rationality isn’t rational, we should stop valuing it so dearly. Therefore science doesn’t work. Therefore quantum woo and Cartesian dualism. It is discussed here (it is excellent fodder for an Intro to Critical Thinking class). He has also promoted The Secret. Yes, that “The Secret”.

Pillay has some PubMed-registered publications that also display the same lack of rigor, methodological understanding or, heck, understanding of what evidence is and what it may show.

Diagnosis: Helplessly moronic crackpot. People hardly come more densely deluded than this, and Pillay’s spectacular failure to understand evidence or critical thinking impresses even those of us who’ve had to deal with Larry Dossey or Deepak Chopra. Still, it looks as if some people actually listen to him.
Posted by chaospet at 3:37 PM