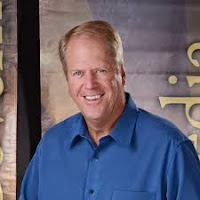 Os Hillman is a dominionist, one of the leading theocrats in the US and an overall pretty scary fellow. He is also president of Marketplace Leaders, an organization devoted to making leaders view their workplaces as a ministry, which is part of the “seven mountains” strategy (Hillman is behind the Reclaiming the Seven Mountains website). His website promotes the work of people like Johnny Enlow, who has asserted that the goal of Christians ought to be to establish a “virtual theocracy” and that the best way to achieve this is through stealth, and Lance Wallnau, who also thinks that theocrats should do whatever is necessary to force Biblical law on everyone (including not using the word “dominionism” when the media is present). “Unfortunately, when we embrace a life of sin, no matter what sin it is, we fall into deception,” has Hillman said in a completely different context (while arguing that homosexual love is not love at all but “Satan’s counterfeit role” and should accordingly be actively fought by Christians), which is both perceptive and displaying a staggering lack of self-awareness at the same time.

But no, he doesn’t like marriage equality, and has warned that America may soon face divine punishment for tolerating gay people (he has also suggested lowering the divorce rate as a means to reducing the gay population; the reasoning is, as you would guess, somewhat tortured). In fact, Hillman has prophecied that something bad might be in store for us soon: In “Are We Entering a Modern-Day Amorite Judgment?” he suggested September 2015, and although the prophecy was a bit complicated (it was based on the lunatic rants of deranged Taliban sycophant Jonathan Cahn and is explained here), it involved pointing out that God judged the Amorites by killing them, which doesn’t sound good. Fortunately, according to Hillman, Christians stand to benefit: “If we are prepared this could be the greatest wealth transfer we have ever seen in our lifetime, or it can be a devastating time if you are not prepared,” which sounds remarkably like a standard, cheap magazine horoscope (including the safety valve: if you don’t benefit, you just weren’t prepared enough). Hillman also asked for readers’ email address in order to get his preparation tips. Yes, it’s spam.

He has also claimed that God is (or may be) using Donald Trump to wake up America and “seems to be using Fox News to bring light to moral injustices.”

Diagnosis: Oh, the Taliban-envy. He is also one of those religious fanatics who seems to think that since everyone is a sinner anyways, it doesn’t matter if he lies and deceives a bit extra. Yet, Hillman is a pretty influential character, and it is hard to exaggerate how scary that is.
Posted by G.D. at 3:16 AM