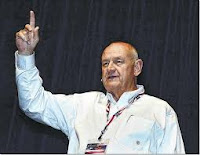 Bill Ledbetter is the pastor of Fairview Baptist Church in Oklahoma, wingnut, creationist and proponent of David Barton-style pseudohistory and Christian Nation nonsense. As such, he has for instance been invited to serve as the weekly chaplain for the Oklahoma legislature, and his 15-minute sermon there sums up his lunacy pretty well (discussion here and here and here; follow the links if you for some reason want to hear the original – it is gloriously insane): Ledbetter started off by claiming that “America is the only nation in history that’s been under one governing document her whole history,” which is false (the Articles of Confederation, anyone? Not that Ledbetter cares overly for accuracy or fact). Then he distorted the infamous Lutz study of references made by the Founding Fathers and passed on a fake Patrick Henry quote about the nation being founded on Christianity as evidence that the Constitution is based on the Bible (Henry, of course, was firmly opposed to the Constitution) and to argue against the separation of church and state (and in favor of mandatory prayers in public schools, which Ledbetter apparently believes is mandated by the Constitution), before rounding it all off with some creationist talking points and claiming that Hurricane Katrina was God’s punishment on New Orleans for sin; also, 9/11 was God’s punishment for not instituting a theocracy: “We must have people in office or put people in office that will make law that corresponds with the word of god and the will of god. not political correctness. Not tolerance – it always brews intolerance.”

Here is his take on evolution: “If you throw God out, then you have to come up with some idea that you’re going to teach your kids about where they came from. And you have to teach that in school. And now all across our nations, kids are taught that they are advanced mutations of a baboon. They are taught that they came from a monkey. Let me tell you something. Evolution is not science – and I know that’s not politically correct … But what it is is an indoctrination to teach a godless worldview.” The problem with his opinion isn’t that it is politically incorrect. And apparently teaching evolution is also unconstitutional, since the Constitution tells us that the Bible should be the guideline for public school curricula: “It [evolution] defies our founding documents – our forefathers talked about the creator in the Declaration of Independence – read it!” Uh-huh. That the Origin of Species was published in 1856 is a problem but far from the main problem with that assertion.

That kind of guy.