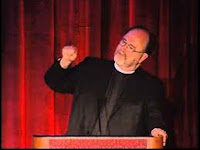 Laurence White is the pastor of Our Savior Lutheran Church in Houston, affiliated with the Texas Restoration Project, and the type of lunatic who claims that the Holocaust was caused by separation of church and state and that “God will destroy and God should destroy America” if it doesn’t end abortion. America, says White (to audiences that generally go livid if anyone dares question American exceptionalism), has gone down the drains, and gay marriage, for instance, shows that Americans are “willing to tolerate the vilest perversion as an ‘alternative, acceptable lifestyle’ while pestilence stalks the land; in public schools that have become facilitators for fornication and procurers for the abortionist knife.” Indeed, legal abortion is, according to White, the “final, deadly malignant festering core of everything” that is wrong with America.

But then, White is a master of ridiculous hyperbole. In 2014, when the city government subpoenaed documents (since withdrawn), including sermons, from a few local pastors, White saw Satan at work: By issuing the subpoenas, Satan had finally “tipped his hand”: “The Adversary, in his arrogance and his pride, has become so bold that he’s tipped his hand,” said White. You see, nothing is a political debate to White (he stated so explicitly in this case); everything is rather a battle between “godless humanism” (i.e. Satan) and true Christians, and if you disagree with him on political issues, the only available explanation is that Satan is controlling you. The subpoenas, in any case, showed, once and for all, that the “godless humanism of the religion that has come to predominate throughout our culture” believes itself to be so powerful that it can now openly seek to destroy Christianity: “This is about the integrity of our faith as Christians.”

As White sees it, America is moving in the direction of Nazi Germany – not because of any rise in fascism, use of propaganda and alternative facts, loss of trust in institutions, or wild-running conspiracy theories, but because pastors do not vocally denounce abortion rights, marriage equality … and evolution, which White said is “not science but religion” (White, of course, has a mind that has gone to rot on the latter, and if all you have is a hammer and so on). White also said that questions posed to politicians about whether they believe in evolution come straight from Satan: “They’re trying to make conservative, Bible-believing candidates look foolish because the Devil is the Father of Lies and he’s good at it.” Pastors, according to White, must “lead our people to be able to discern what is actually going on in this country, that collision of two religions: one pagan, one Christian. And until they recognize that, they’re not going to understand the nature of the spiritual warfare in which we are engaged.” Or, put more succinctly: “Everyone who disagrees with me about politics or science, or anything is an agent of Satan out to destroy Christianity, and must be met with spiritual warfare.”

White is apparently a fan of the historical revisionism of David Barton, and the two have collaborated on numerous occasions.

Bear in mind, though, that White is not a nobody on the religious right scene. He has worked closely with politicans and political candidates, and they seem to lend him their ear, at least on occasion.

Diagnosis: Steaming, screeching ball of raging fundamentalism, hate and paranoia. But yes, White is a not entirely insignificant force in the religious right circus, and his political influence might be non-negligible.