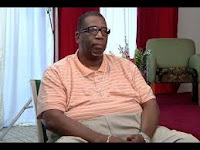 Kenneth Adkins is a Florida-based pastor and anti-gay activist who has described himself as “one of the most Respected Black Conservative Voices in America”. Adkins received some attention when he, in the wake of the 2016 shooting that left 49 club goers dead and 53 others wounded at a gay nightclub in Orlando, said that “I don’t see none of them as victims. I see them as getting what they deserve!!” He has earlier suggested that zeh gays are in some sort of conspiracy to replace “the Black Struggle” with their own, and that they might have murdered Martin Luther King as part of that effort (“Hell, the Sissies might have killed Dr. King!!”)
And in 2017, Adkins was, not entirely unsurprisingly and entirely in line with Haggard’s Law, convicted of molesting two children, one male and one female, who attended his church. (Adkins does, by the way, have an impressively long criminal record).
Diagnosis: Yeah, there isn’t much more that needs to be said about this vile piece of bigoted insanity. Probably neutralized.
Posted by G.D. at 5:07 AM