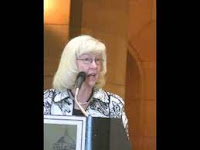 Barbara Anderson is a Minnesota-based anti-gay activist and former close ally of Michele Bachmann. She is a long-time “researcher” for the Minnesota Family Council, head of the anti-gay hate group Parents Action League and the MN Child Protection League, as well as (sometime?) vice-president of Janet Boynes’s ex-gay front group known as the National Ex-Gay Educators’ Caucus. According to Anderson, “the greatest threat to our freedom and the health and well-being of our children is from this radical homosexual agenda that is just so pervasive,” because freedom is when everyone leads their lives the way Barb Anderson feels is proper and legal restrictions are in place to ensure that they precisely that.

Yes, Anderson is a vocal supporter of the scientifically discredited idea of conversion therapy, and she has suggested that “a lot” of gay teens have been sexually abused, which is why they are “sexually confused” and in need of “change”. To support her view, she has pushed Paul Cameron’s widely discredited “research” to suggest that homosexuality is “three times more dangerous than smoking”, as well as statements by the small fringe conspiracy group American College of Pediatricians, and she has claimed that the “ex-gay” movement deserves “equal time” in public school discussions.

Anderson is particularly opposed to Gay Straight Alliances (GSAs) in schools, which she claims “affirm sexual disorders”, insisting that “GSAs will draw more confused and questioning youth into gay experimentation” and are used, insidiously, to “recruit” youths into homosexuality. Indeed, even supporting young gay people is getting on a “train that is leading down a track that is going to be very harmful to them and their friends”, and LGBTQ-inclusive anti-bullying efforts are a product of the “pied piper of perversion” – homosexual youths should be bullied until they come to their senses. Her views earned her a central role in the Minnesota For Marriage campaign.

Anderson is probably most famous, however, for directly contributing to a rash of suicides among teens in the Anoka-Hennepin school district (by actively blocking efforts to reach out to and offer help to teens bullied for being gay or perceived as gay at the shools at which the suicides occurred. Her actions received national attention. Anderson had actively petitioned the shool board (“[t]he majority of parents do not wish to have there [sic] children taught that the gay lifestyle is a normal acceptable alternative”) and managed to get the school board to adopt a “No Homo Promo” directive pronouncing that within the health curriculum, “homosexuality not be taught/addressed as a normal, valid lifestyle.” Of course, people like Anderson and the Minnesota Family Council refused to assume responsibility for their actions, instead trying to put the blame on the people who actually tried to help while ramping up the insane anti-gay rhetoric. Tom Prichard, head of the MFC, for instance, said that his group would continue to fight anti-bullying efforts in the Anoka-Hennepin schools, and that the suicides were not the product of bullying but rather (imaginary) “homosexual indoctrination” and the students who died had adopted an “unhealthy lifestyle”. Anderson, meanwhile, accused safe-school groups such as GLSEN of trying to use the student suicides “as a Trojan horse” to instill “pro-gay training” in schools. At least the evil rot Anderson and her ilk fostered in the district didn’t escape attention. When the school district finally adopted new guidelines, Anderson called the anti-bullying efforts “child abuse” and said that the new guidelines regarding sexual orientation would turn kids gay.

When Anderson’s group Parents Action League was belatedly and obviously correctly labeled a hate group by the SPLC, Anderson complained that the SPLC is “totally opposed to Judeo-Christian values [for Anderson: primarily hate], they really hate Christians and hate evangelicals,” and that it should the SPLC “that should be considered a hate group.” (She later characterized the designation as “a badge of honor”).

Diagnosis: Hateful monster. She looks like a kind grandmother, but is a seriously evil, deranged and hateful disgrace to humanity. Fortunately, the efforts of people like her seem to have lost some of its power, but she had time to do serious harm.