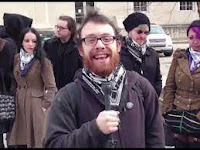 We can’t stomach writing more than a brief note about this unsavory piece of tripe, but Andrew Alan Escher Auernheimer, best known by his pseudonym “weev”, is a hacker and an altright, cybersexist, self-avowed internet troll. Auernheimer has apparently been acting as webmaster for the neo-Nazi website The Daily Stormer, and SPLC describes him as “a neo-Nazi white supremacist” known for “extremely violent rhetoric advocating genocide of non-whites”. It is, of course, worth emphasizing out that the point of many of his more incendiary remarks and ploys – calling Timothy McVeigh one of “the greatest patriots of our generation” and saying that “Hitler did nothing wrong”, for instance – is culture jamming (other examples include expressions of gratitude to Dylann Roof: “I am thank thankful [sic] for his personal sacrifice of his life and future for white children” and praise for Anders Breivik: “He is a hero of his people, and I cannot wait for his liberation from captivity at the hands of swine”), but that doesn’t mean that he doesn’t support genocide. He does. And his frequent death threats (e.g. here) are worth taking seriously. Moreover, Auernheimer is surprisingly well connected.

Diagnosis: He really is a sad piece of garbage. Unfortunately, there are lots of other sad, pieces of troll garbage who follow his lead like drones while thinking they’re doing something worthwhile and edgy.