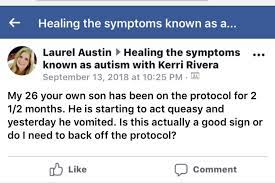 Few versions of quackery is quackier – or more dangerous – than the insane nonsense of using bleach products to try to “cure” anything whatsoever, be it COVID-19 or autism. Yet the toxic bleach product MMS (Miracle Mineral Solution), or Chlorine Dioxide, has long been peddled precisely for autism – as well as for AIDS, cancer and more or less every otherdisease known to humanity. And, particularly due to the efforts of Kerri Rivera, delusional and moronic parents of autistic children continue to fall for it – and yes: we stand by the use of “delusional” and “moronic”. We understand how ordinary, intelligent people in desperate situations can fall prey to scams and woo tailored toward people in their situations, but falling for MMS really does require poor cognitive skills.

To be clear: According to MMS charlatans, parents ought poison their Autistic children with their type of bleach both orally and by way of an enema, which both are forms of torture: Side effects include vomiting, nausea, diarrhoea, seizures, breathing problems, rashes, boils, hair loss, liver and kidney damage, changes in blood pressure, digestive issues and more. Enemas cause shedding of intestinal tissue, bleeding, bowel prolapse, internal bleeding. Deaths have occurred. The regime has no beneficial effects.

Though we prefer to cover the peddlers rather than the parents here, we need to mention Laurel Austin. Austin is a mother to six children, four of which are diagnosed as autistic. She has been giving at least two of them MMS bleach. Austin is also antivaccine, and still claiming that vaccines are responsible for her children’s autism, which they demonstrably are not, and she has exposed her children to a range of unproven and dangerous quack treatments. In short, Laurel Austin is a horrible lunatic piece of garbage, and completely unsuited as a parent or for being in any sort of authority or care relation to any other person. The primary justification for covering her here, however, is that she is a pretty active proponent of this kind of quackery on social media, even giving “advice” to other parents. She has also co-hosted and appeared on various anti-vaccine radio programs and videos, often with Kerri Rivera herself. Oh, and Austin is even a flat-earther (no, really) who attends annual conferences with other enthusiasts of that, well, idea.

She made a bit of a name for herself by being exposed by NBC. Not particularly fancying the attention, she set up a Go Fund Me page to raise money to defend her decision to continue to torture her children with dangerous quackery against people and institutions challenging her (including legal challenges).

Another horrifying detail: Apparently a real doctor signed off on Austin’s bleach protocol – one Sarita Singh, who, as of 2019, worked at Kansas University Medical Center. It is worth noting that the KU Medical Center is already an institution you should be hesitant about contacting if you need real medical advice – after all, it’s the home institution of Jeanne Drisko, whom the Medical Center apparently even honored in 2017, despite her long history of anti-science antics and conspiracy mongering. Singh, meanwhile, seems to have her own family medicine practice. We recommend maintaining a safe distance. This person is dangerous and literally responsible for the continued torture of children – we’re in some serious cartoon villain territory here.

Diagnosis: Already given above: a horrible lunatic piece of garbage, completely unsuited as a parent or for being in any sort of authority or care relation to any other person.