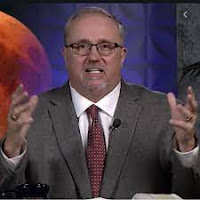 Paul Begley is a fuming wingnut, pastor, conspiracy theorist and host of the “Coming Apocalypse” program – yes, that kind of pastor. Precisely when the apocalypse is supposed to come is less unambiguous – it often seems to be happening constantly, as Begley presents things – but Begley has at least given us the date April 13, 2029, when, on the basis of some astronomical observations as filtered through sensationalist media, there was a question whether an asteroid could, in principle, hit Earth. That isn’t Begley’s first celestial-object-based end-times predictions, however; in 2011, he apparently got hold of some conspiracy nonsense about Comet Elenin, which NASA patiently tried to tell people would not threaten Earth – people like Begley, however, when faced with a choice between facts and incoherent conspiracy babbling, won’t hesitate: “It’s coming!” thundered Begley to his Congregation. It was admittedly unclear precisely what it’s effects would be – “Will there be some type of magnetic pull? Will the poles shift? Will there be some type of pull of gravity that creates earthquakes and tsunamis and volcanoes and hurricanes and tornadoes and cyclones and mudslides, forest fires?” asked Begley – but it was pretty clear to him that there would be some effect, and that it would be cataclysmic: you see, the comet’s nearest point to Earth would fall during the Feast of Tabernacles, according the Jewish calendar, and what are the odds for that? “I’m here to tell you right now, we’re getting closer and closer and closer and closer to the Second Coming of Jesus Christ,” said Begley.

In 2017, Begley even jumped on the Nibiru revival bandwagon, which was apparently too silly even for most of the loonier parts of the conspiracyverse. Nibiru would, according to Begley, appear in 2017, and he declared that a solar eclipse was a sign both of the apocalypse and of the (non-existent) rogue planet. In 2019, however, it was blood moons (a very natural and common phenomenon) that conclusively showed that we are living in the “last days”. At least he doesn’t let persistent, total out-of-the-field failures stop him, or even cool down his prophetic activities. In 2018, for instance, he predicted that Romney would run for president in 2020 in order to siphon votes away from President Trump and help Clinton become president.

He has also expressed deep concerns that scientists working at CERN are trying to open a portal to hell.

Demons in the White House

Begley managed to get some mainstream media attention for his 2017 claim that First Lady Melania Trump ordered the White House to be “completely exorcised” before she moved in. “The first lady, in that five hours when the Obamas and the Trumps went down to the Capitol and Trump was being sworn in as the 45th president of the United States,” Begley elaborated, based entirely on his imagination, “Melania Trump said to her husband, ‘I’m not going to go into that White House unless it has been completely exorcised.’” Such an operation was required, according to Begley, because when the Obamas lived there, the White House was filled with “all kinds of idol gods and images and all kinds of artifacts in there that were demonic,” so “during that five hours when they were ripping out carpets and changing drapes, there were people in there packing up every idol.” When asked for sources, Begley said that his source for the story was close to “those working in the White House” but had requested that he (or she) not be named.

One interesting point here is that Begley seems to simultaneously believe his story wholeheartedly and be completely aware that he made it up out of thin air. The most interesting point about the story, however, may be the fall-out. Though completely idiotic and obviously false, the far-right press decided to run with the tale: CNS News was quickly there, and it made its way straight to American Family Radio and Infowars – Infowars presenter Owen Shroyer apparently thought Begley’s story in some not-entirely-clear way discredited the presumably apocryphical “pee tape” and that the whole thing symbolizes “that Donald Trump and Melania Trump understand that this is more than a political battle, more than an earthly battle, but a spiritual battle.” Bryan Fischer, meanwhile, declared that the first lady was very right to remove all those “demons” left in the White House by the Obamas. The story got so big that the first lady’s office actually chose to publicly affirm that the story was “not true in any way.” As Miranda Blue points out, the whole thing was an illustrative example of the genre of Trump-finds-God fan fiction, which has been going really, really strong in fundie rightwing circles.

Begley himself, by the way, did not back down: Though the first lady’s office might have denied that there was an exorcism in the White House, “they didn’t say that they didn’t remove all of the idols, all the relics, all the witchcraft, all the voodoo, all of the things that were in there.”

Begley’s political commentaries are in general characterized by his view that anyone who disagrees with him is possessed by demons and controlled by the Illuminati (they’re everywhere). For a while, Begley was the main proponent of the claim that Barack Obama was leading an Illuminati plot to assassinate then-President Trump – they’ve apparently been assassinating people left and right, including White House economic adviser Larry Kudlow, who was shot with a “heart attack gun” – and that if Hillary Clinton had been elected president, she would have handed control of the US over to the Illuminati/the United Nations in preparation for the rise of the Antichrist. That, for instance, is why Obama ordered the government to spy on Trump: “Obama tapped his phones, he tapped his home, he sent around drones, trying to figure out a way to derail the Trump campaign.”  According to Begley, “the deep state [which is apparently usually focused on trying to put Christians in internment camps – Begley knows this on the basis of a miraculous vision he had in 1994], the New World Order, the Illuminati, the Bilderberg group, the Bohemian Grove [in 2018, Begley suggested that the recent suicides of designer Kate Spade and travel writer Anthony Bourdain were really “high profile sacrifices of the Illuminati” that took place during the annual Bilderberg conference], everybody at Skull & Bones, everybody in every secret society that there is, Nancy Pelosi, Chuck Schumer, all of the swamp creatures, all of ’em; the plan was to put Hillary Clinton in the White House and then to move this nation and the world under a one-world government, a New World Order.” And Clinton would have subverted the democratic process: “There would be laws changed; Obama put all these different judges in the federal courts and in different positions, they were going to rewrite this Constitution, folks. They were going to railroad this democracy … The United States was going to be handed over to the New World Order or to the Illuminati at the United Nations and then there would be ten kings selected as an Antichrist would emerge on the scene.” Fortunately, Trump God derailed that plan because “Israel needed to celebrate its 70th anniversary with the U.S. embassy and the city of Jerusalem as the capital of the nation.” Lucky us.

Once Trump got to power, however, he teamed up with that other beacon of Meassianic light, Putin, to successfully combat the Illuminati and One World government (“they are. They really, really are,” declared Begley because unless you assert it several times it doesn’t count as proof). And that’s why all these people are so critical of Trump: “We have an Antichrist lurking among us, folks, and these old senators and congressmen that won’t go away, it’s because they thought they were going to see the glory of the Luciferians. They thought their time had come.” Trump’s critics “are just the mouthpiece of the beast.”

FBI agent Peter Strzok, by the way, was obviously one of the Illuminati agents – at least Begley quickly declared that Strzok was part of a demonic Illuminati cabal trying to implement a one-world government: “You were that close from losing this freedom, what we call a democracy or a republic. We came within an eyelash of losing this nation.” Explained Begley: “I think [not a concept he masters] Peter Strzok is part of a vast secret society complexity, an Illuminati demonically-charged biblical beast called the deep state that was involved in hijacking this great nation of America and ultimately hijacking the world into a one-world government, a new world order. Because what Peter Strzok was doing is right out of the pages of the Illuminati.” It’s not entirely clear which pages Begley has been reading.

However, even Clinton’s candidacy was apparently dwarfed by the 2018 sexual assault and misconduct allegations against Supreme Court (then-)nominee Brett Kavanaugh, which wasn’t merely sign of the Beast but represented “the darkest hour in the last 150 years” and led Begley to wonder how we could possibly survive.

Begley’s 2018 discussion of the Parkland shootings with incoherent maniac Russ Dizdar of Shatter The Darkness is also illuminating (or whatever you call it). Begley and Dizdar floated a range of ideas about who could “really” have been behind the massacre – “demons” being an obvious suggestion, … but could it also be “the video games, virtual reality video games?”; or “was this planted, what this done, did they use this weaponized microwave technology to mess with the brain of this kid to get him to do this to try to take away our Second Amendment rights and your right to bear arms?” That the approach would have been a notoriously silly means to employ if the goal was to curb everyone’s Second Amendment rights is clearly not anything worth pointing out to someone with a mind like Begley’s.

Diagnosis: Demonstrably unable to distinguish reality from incoherent, angry fever dreams, or facts from nonsense stories he just made up himself, Begley must count as one of the less coherent, rabid and paranoid fundies on the fundie clown circus – at least among those that enjoy a modicum of real influence. … cause he does, in fact, enjoy some influence, thus demonstrating that there is, indeed, room left on the far side of the JFK return Qanon conspiracy cult-level crazy.

Editorial note: After completing this entry, we discovered that we’ve actually covered Begley before, long before he rose to the limelight. In case anyone keeps a tally, we decided not to give this entry a whole number.