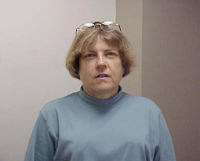 Bryson holds a Ph.D. in physical chemistry and was for a while a teacher at Mississippi University for Women.

Creationist (intelligent design) and witness for the minority at the Kansas evolution hearings (a general discussion of the hearings can be found here). Claims that she used to accept evolution, but that critical studies turned her around (yes, that canard). Currently a “creationist icon”.

Notorious for giving a presentation on creationism (mostly the argument from design and the unlikelihood of evolution since if there is no designer then evolution must be just random chance) at the university, “very warmly received by the students.” Afterwards, however, she was severely criticized by biologist professors and subsequently left the university (circumstances are unclear – her faculty evaluations were bad, and she claimed that she was harassed and realized she would never get tenure). Her story was picked up and publicized by the American Family Association and resulted in some outcry from fellow creationists. Bryson has subsequently achieved status as one of ID’s Expelled Martyrs. Currently she is used as one of the most notable examples of the discriminations (“hate crimes” against the religious, according to Jerry Bergman) against dissidents by “evolutionists”, and proof of the major “atheist and materialist conspiracy” that currently infests science.

A discussion of Bryson’s role in the Hearings is here.

This entry also indicts other witnesses for the minority, such as James Barham, an MD in classics and “independent scholar” who used to believe in evolution and materialism but who reasoned his way to Jesus and ID (surely a pattern of argumentation here). Christiancinema.com calls him a “Scholar and author specializing in evolutionary epistemology”. His basic argument is: “evolution leads to materialism and no meaning or purpose with life; God exists, and thus there is purpose; hence materialism is false, hence evolution is false” (yes, with the fallacy).
Posted by chaospet at 5:01 PM