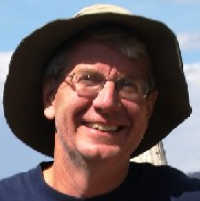 We had some hesitation over Michelle Malkin. Vileness doesn’t qualify you for an entry by itself, and is Malkin a loon? Well, the incident where she saw an ad Rachel Ray did for Dunkin' Donuts and decided that the black-and-white paisley scarf Ray was wearing was a sly sign of support for the Palestinian Liberation Organization gets her very close (here is her own screed).

But to avoid accusations political bias, we’ll move to a very clear case: Bruce Malone. Malone is – you guessed it – a young earth creationist who travels around the country (at least Minnesota) giving talks on issues he knows nothing whatsoever about to audiences who generally know nothing about the issues either. Standard fare. For a summary of his talk “Astounding Evidence for a Young Earth”, you can look here. His argument that Genesis must be read literally (“days” meaning “24-hour days” rather than being a metaphor for millions of years) goes like this: “If God made the entire Universe and all in six days and rested on the seventh, it's 24 hours. If ‘days’ equals ‘millions of years’ then you could not rest on the seventh ‘day’ because it would be millions of years.” Yes, that’s the quality of his evidence. That, and conspiracy theory: the reason scientists don’t accept his (Malone’s) theories is because they don’t want to lose their jobs.

Diagnosis: A sad figure; he is not particularly original, but he is apparently a rather tireless peddler of silliness and nonsense.
Posted by chaospet at 6:52 PM