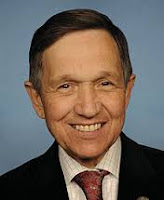 Dennis Kucinich is the former Congressman for Ohio’s 10th District, serving until 2012, and former presidential candidate from 2008 (he didn’t get very far). Famous for being among the progressive members of the House and for opposing the Iraq War from the beginning, he is also remembered for being a hardcore crackpot, New Age fundie and pseudoscience promoter. Part of his platform as a presidential candidate, for instance, was creating a moratorium on GMOs. He is currently a Fox News contributor, and was presumably not hired to make liberals look good.

Back in the 80s Kucinich lived with New Age woo-guru Shirley MacLaine, one of the more ridiculous creatures in the New Age circus (fierce competition notwithstanding). During that time he allegedly had an encounter with a UFO and honed his skills at unintentionally channeling a Chopra quote generator: “In our soul’s Magnificent, we become conscious of the cosmos within us. We hear the music of peace, we hear the music of cooperation, we hear music of love. In our soul’s forgetting, we become unconscious of our cosmic birthright, blighted with disharmony, disunity, torn asunder from the stars in a disaster.” If you think that sounds profound, you are probably stupid. And according to Kucinich “[t]he energy of the stars becomes us. We become the energy of the stars. Stardust and spirit unite and we begin: one with the universe, whole and holy. From one source, endless creative energy, bursting forth, kinetic, elemental; we, the earth, air, water and fire-source of nearly fifteen billion years of cosmic spiraling.” This is not correct.

In 2001, Kucinich introduced bill HR2977 to ban “extraterrestrial weapons” and exotic “radiation, electromagnetic, psychotronic, sonic, laser, or other energies ... for the purpose of information war, mood management, or mind control of such populations”, including “chemtrails” and HAARP. The mention of “chemtrails” in the bill has later been used as evidence for their existence; in reality, it just shows that Kucinich is silly but chemtrail conspiracy theorists tend to struggle with reality. To draft the bill Kucinich apparently relied on the expertise of Alfred Webre. The bill was, in fact, probably written by Webre and Carol Rosin, and one may wonder how carefully Kucinich read it, but he is still responsible for introducing it, and in 2005, when introducing a newer version of the bill (to ban space weapons), he did ask: “what is to happen when the United States takes nuclear fire up to the gates of heaven? ‘Such an offense against humanity could bring the wrath of God upon this nation.’” Since space is close to Heaven, of course.

During his career Kucinich managed to sponsor a grand total of three pieces of legislation that actually passed: allowing Ukrainian TV access to an American program, naming a Cleveland post office, and naming a dead man an honorary citizen of the US. As such, Kucinich may possibly be the least effective legislator of all time.

Diagnosis: Mostly a silly and harmless curiosity and at the very least more or less neutralized by now. Still.
Posted by G.D. at 3:29 AM