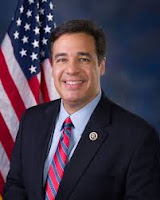 Raúl Rafael Labrador is the U.S. Representative for Idaho’s 1st congressional district since 2011 –previously representing District 14B in the Idaho House of Representatives – wingnut, goldbugger and anti-science activist, probably best known for his recent comment that nobody dies because they don’t have access to health care.

Politically Labrador is generally known for wanting to withdraw the US from the UN, returning to the Gold Standard, eliminating the Department of Education and repealing the 17th Amendment and end the right of voters to elect their Senators, since that is “the constitutional position to take” and the only way to make sure “that US Senators are actually beholden to the people” (wtf?). He also thinks the ACA is a betrayal of the US, wish to stop the federal government from enforcing gun laws and – the usual stuff – wants make the federal government “provide for the presence of God in the public domain,” and opposes same-sex marriage rights. His mission to rewrite the Consitution has earned him the firm support of the American Family Association, and Bryan Fischer is an avowed fan.

But ok: the official reason for including Labrador in our Encyclopedia, is that he is a firm climate change denier. Says Labrador: “It’s interesting that about a decade ago there was a lot of talk about ‘global warming.’ Thirty years ago we were talking about ‘global cooling’ [This is false]. Now all we hear about is ‘climate change’ [well … ]. There has been evidence throughout history of cycles when the earth gets warmer and cycles when the earth gets colder [which is irrelevant to the issue]. We should always be wise stewards of the earth and all of our natural resources. But as a policymaker, I won’t be guided by the global warming propaganda machine. Al Gore [who got things mostly right] – we need you to return your Nobel Peace Prize!” In 2010 Labrador signed a pledge sponsored by Americans for Prosperity promising to vote against any Global Warming legislation that would raise taxes.

Diagnosis: Liar or idiot. Those are not mutually exclusive. And of course: Labrador is only one of many wingnut climate change denialists in Congress, though that’s hardly an excuse.
Posted by G.D. at 3:57 AM