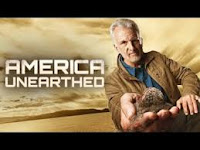 One of the most versatile cranks in the US, Scott Wolter is a self-proclaimed forensic geologist and former host of the television series America Unearthed, a popular hit series where Wolter would “investigate” and engage in JAQing off about mysteries and artifacts that he believes reveal an alternative history of North America before the United States. “There’s a hidden history in this country that nobody knows about,” says Wolter, failing to address the most obvious reason no one knows about it.

His show is based cherry-picking “evidence” from all manners of nonsense, including secret symbols, alleged secret societies, hoaxes, alleged coverups, vague coincidences, testimony from other cranks and complete fabrication, in order to shoehorn it into his own, grand unified conspiracy theory. For the most parts, he completely ignores the facts before him (as well as the claims of the other conspiracy theorists and crackpots he cites) to invent his own.

There is a comprehensive review of his TV series here. The episodes of season one (link to reviews in the titles) are:

And that, of course, was only the start. Later seasons are even lighter on research and go into even sillier territory, with Wolter investigating for instance whether the Ark of the Covenant could be in America (as per a well-known documentary; Wolter doesn’t find it), whether the New World Order was behind the Denver International Airport and the Georgia Guidestones, and Bigfoot). There is a sample review of one of the episodes here.

Wolter’s rantings are endlessly silly, of course, but if you lean toward thinking that the alt-history of people like Scott Wolter is just harmless fun, we encourage you to read this.

Diagnosis: Absolute rubbish, and calling it “pseudoscience” is a stretch – “incoherent conspiracy theories that Wolter doesn’t even try to back up” would be closer. And again: if you think the stuff people like Scott Wolter is doing is just harmless fun, it isn’t.