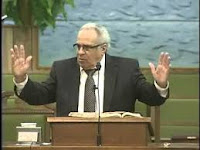 Conversion therapy, in addition to being useless, harmful, abusive nonsense, requires time and effort, so if you really wanted to get rid of homosexuals from society you might consider quicker fixes. Like the suggestion put on the table by Charles Worley, a fundamentalist King James Only pastor and current head of Providence Road Baptist Church in North Carolina.

In a 2012 sermon, Worley argued that a solution to the “problem” of homosexuals would be to have the entire American gay community interred in a giant “pen with an electrified fence”, so they couldn't escape and reproduce and would thus would eventually all starve and die out. (Yes, there are some details there that don’t add up even if you were a committed Nazi and fine with the means.) Unfortunately, Worley said, he couldn’t get the law past Congress, because America is currently [2012] being led by a “baby killing homosexual lover”. So as a compromise solution, he suggested that the next gay child to be born should be the first person to be interred in such camps. He did not expand upon what means he would employ to determine that the baby was, indeed, gay. Also, anyone who isn’t completely opposed to homosexuality and willing to use any means necessary to vanquish it, is a fool, because God. In fact, Worley also tried to make a secular case forhis suggestion, too: “It makes me pukin’ sick to think about – I don’t even whether or not to say this in the pulpit – can you imagine kissing some man?” (and yes, he sounds exactly like you’d expect him to sound).

After Worley’s suggestion received some attention, some among Worley’s flock actually defended him by effectively trying to claim that the vile bigot here isn’t Worley, but God. One Geneva Sims, for instance, pointed out that “[Worley] had every right to say what he said about putting them in a pen and giving them food. The Bible says they are worthy of death. He is preaching God’s word.” Meanwhile, one Stacey Pritchard pointed out that “sometimes you’ve got to be scared straight. He is trying to save those people from Hell,” and that Worley’s message wasn’t one of hate but of tough love. This is very obviously very incorrect. Worley also received support by people outside his church, like Billy Ball, pastor of Faith Baptist Church in Primrose, Georgia, and Brad “sodomites are vile, unnatural, and worthy of death” Cheatham.

Diagnosis: A useful model for the stereotype hateful, inbred, stupid, bigoted, fundie redneck in any comedy show (he wouldn’t be believeable enough for anything more realistic). Apparently he has some followers in NC and Georgia, too, though his ideas are unlikely to reach very far.