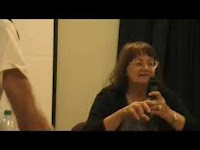 Judyth Vary Baker is a curious and colorful figure, generally pretty obscure but also rather well-known in JFK assassination conspiracy circles. Baker claims to have been Lee Harvey Oswald’s lover and girlfriend prior to the assassination, and has spent a number of decades trying to clear Oswald’s name and rather blame sinister forces and conspiracies. Her story doesn’t even remotely hang together, but she nevertheless has a surprising number of fans.

Two typical gaps in her stories:

-       Though Baker and Oswald might theoretically have been with the Reily Coffee Company together, Baker, who was married at the time, has not the slightest bit of evidence to indicate that they were ever romantically involved or even knew each other: Baker has a number of love letters written by her at the time – the dates work out, but unfortunately the name of the addressee has been torn off of all of the letter, which to most people would perhaps induce a veneer of “something’s off with her story” but to Baker’s audience of dingbats rather indicates that the conspiracy was more extensive than everyone else thinks.

-       According to Baker’s story, Baker and Oswald were recruited by the CIA initially to produce a bioweapon for the purpose of killing Fidel Castro: a cocktail that included both a virus designed to knock out Castro’s immune system and cancer cells that would infect him and kill him. Oswald and Baker – a highschool dropout and a nineteen-year old girl with no science background –were supposed to develop the cocktail and biologically engineer appropriate cancer cells for the CIA covertly in the kitchen of their apartment. “But didn’t the CIA have poisons that would work? And labs? And experts?” you might ask. The answer is that close-minded people like you are not among the target audience for Baker’s tale of sinister conspiracies. She has admittedly modified her story over time in response to thorny questions, though.

There is a decent rundown of other worries people might sort of immediately have with Baker’s story here and a couple of unsolvable contradictions here. It is worth noting that one of her own explanations for why she doesn’t have any evidence is, literally, that her dogs ate it (it was “badly chewed by puppies”).

Baker has, however, written more than one book about her version of events – the fact that they rather blatantly contradict each other is explained by the claim that she deliberately laced earlier books, since details have been uncontrovertibly falsified, with disinformation: “I wrote a bunch of nonsense because I didn’t want to get sued,” said Baker – and received some attention when she was featured in the documentary series The Men Who Killed Kennedy (in the later conspiracy theory episodes that were subsequently withdrawn). She is promoted by well-known conspiracy theorists like James Fetzer, which should not lend her much credibility.

Her accounts are full of all sorts of other interesting tidbits, too. Did you know that she invented the word “nerd” ad suggested it to Dr. Seuss (ostensibly a close acquaintance of her when she was a child), who adopted it. She also once broke up a witches’ coven just when they were about to perform a human sacrifice.