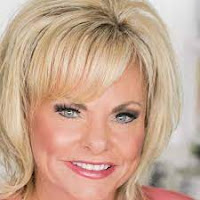 Loon celebrity and televangelist Jim Bakker is one of the most legendary and insane loons alive in the world at the moment, and any opportunity to remind people how utterly insane and how much of a fraud he actually is, should be taken. But his wife, Lori, who often accompanies him on his show, is quite a piece of work herself, and she deserves her own entry – partially but not only because she thinks that her convicted fraudster husband is just like King David and the Apostle Paul and “one of God’s greatest generals”. In addition to co-hosting the Jim Bakker show, Lori Bakker is the founder and president of the organization Lori’s House, which “provides spiritual and other forms of assistance to pregnant women and to those who have undergone the pain of abortion.”

In general, Bakker espouses the kinds of views you’d expect from wealthy fundie frauds, such as the common but utterly ridiculous persecution complex. In 2018, for instance, Bakker warned her viewers that they really needed to support Trump; for if liberals gained power, they’ll throw Christians in “mental illness centers”. According to Bakker, those who oppose Trump consider Christians “mentally ill” and are just looking for an excuse to “put us all away” (you should also splurge a bit on the survivalist junk the Bakkers are selling. “I’m not kidding,” Bakker assured us. Then she, for some reason, refers to the time when women who were considered unclean were ostracized, based on rules codified in the Bible (she didn’t mention the codified in the Bible bit). Later, she and Jim claimed that the Democrats were trying to outlaw the Bible.

Though she nominally cares about women, and has even written a book about women in the Bible, she did not care about the 2016 Women’s March on Washington, rather asserting that the women who marched against President Trump were probably survivors of childhood abuse (survivors of abuse are by default notoriously unreliable): “Most women like that [?] have been molested, they’ve been abused, they’ve been whatever in their life. […] And they just need the healing of the lord.”

She is particularly concerned about abortion, however. According to Bakker, abortion is linked to Satanic baby-killing rituals – there are even Satanic temples hidden inside Planned Parenthood clinics. And the activities of these occult forces increase around Halloween: “I will tell you, especially on Halloween, that many many many many Satanic rituals – abortion rituals – are performed. It’s the truth.” She needed to add the last sentence to reassure viewers who might have suspected otherwise.

Diagnosis: Oh, good grief. Even after all this years of loons, it remains baffling how anyone can listen to these people and think that they’re anything but hysterical, incoherent maniacs.