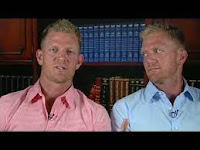 The Benham brothers, David and Jason, are the spawn of legendary anti-abortion and anti-gay activist Flip Benham, and themselves hardcore fanatics and promoters of hate and bigotry. Both are Liberty University graduates (and currently fellows at Liberty University’s Standing for Freedom Center), Minor League Baseball players, and filmmakers (a number of Christian films, some of which have been relatively successful with certain groups), and probably most notable for their alternative, for-profit model for Christian mission work termed ‘missioneering’, which, we admit, is among the most quintessentially American ideas we have ever encountered. Their missioneering work have included virtual assistant and business services, CrossFit gyms in North Carolina and ample space on American Family Radio to push their ideas.

In 2014, HGTV announced a home improvement reality television show with the brothers. The plans were cancelled after HGTV was made aware of the dismal nature of the brothers’ characters and their work as anti-gay extremists. Christianity Today claimed that the show was cancelled because the brothers were “too Christian for cable”, which would be correct only on an interesting definition of “too Christian”.

Among the examples cited to HGTV was David Benham’s 2012 protest outside the Democratic National Convention, where he asserted that “homosexuality and its agenda” was “attacking the nation” and that “demonic ideologies” were infiltrating “our universities and our public school systems.” Also relevant was David Benham’s work to promote and supportNorth Carolina Amendment 1, a referendum that would ban same-sex marriage and civil unions in the North Carolina constitution. He also compared same-sex marriage with Nazi Germany, because of course he did. He later did claim that he never compared gay rights advocates to Nazis, but he could make that claim because people like the Benham brothers are so good Christians that they have been granted an exception to the general ban on lying whenever it suits them, a privilege they use to the full.

Like a lot of hateful anti-gay activists, the brothers are careful to point out that they’re “not there to bash” gay people, e.g. when they arrange anti-gay demonstrations, but rather, in Jason’s words, “to tell them that Jesus loves you just the way you are, but he refuses to leave you that way.” They also call gay people “destructive” and “vile” “filth” and claim that gay people are out to destroy the nation because they are under the influence of demonic ideologies. But it’s all a way of telling them that Jesus loves them, we guess, and should never be mistaken for “bashing”. Here they explain their love for gay people by claiming that the homosexual “agenda” is led by Satan. In particular, the brothers are not trying to fight gay people, but are rather engaged in a spiritual war against Satan and demonic forces, the forces that, as usual, are out to silence Christianity. “It’s a spiritual fight,” Jason Benham said. “Silencing” in this context is when gay people criticize the brothers for calling them “vile” and “filth” and for engaging in “bashing”; offering such criticism is a terribly demonic thing to do.

For of course, the Benham brothers are the victims here. According to the brothers, “discrimination against gay people simply does not exist. To say otherwise is disingenuous at best and misleading at worst.” By contrast, American Christians are exactly like the victims of ISIS! Because just like ISIS silences their victims by beheading them, critics of antigay twats like the Benham brothers silence them by quoting them verbatim. At least that’s how the brothers described it when they complained about how they were silenced at a massive conference broadcast on C-SPAN. Jason Benham also likened himself and his brother to Jesus Christ. In other words, they clearly struggle mightily to figure out how comparisons work.

The Satanic origin of gay marriage and gay relationships is a recurring topic in their speeches and interviews. According to Jason, Satan is behind both gay relationships and abortion rights because he hates reproduction; David, meanwhile, claims that same-sex marriage is the “ultimate attack” on God [it’s not clear that he knows what ‘ultimate’ means, but it sounds dire] and “a mask for Satan.” And the brothers truly saw “the inside of the devil’s lair” when they lost their TV show and became victims of “the thought mafia that targets Christians”. Here is a summary of a talk David gave at one of David Lane’s supposedly “non-political” rallies in North Carolina. According to the brothers, hurricanes striking the U.S. are also a warning for the U.S. to repent for “breaching the boundaries” of God on gender, sexuality and marriage.

And here is the Benhams on how the sexual revolution is forcing itself on everyone and how the revolution “has no capacity for reason. It has no ability to see its own hypocrisy or discern its hopeless future. It just forces itself on others regardless of cost or consequence.” It’s a strikingly weird column. But it was the same observations that led them, in 2017, to skip Lady Gaga’s Super Bowl halftime show to protest by prayer how the “vine of Sodom has pierced and penetrated our nation at one of the biggest sporting events of the year.”

Like so many fundies, the Benham brothers like to claim that Christians are persecuted in the US today, and in a column for the WND, they nicely explain what they mean by more or less explicitly stating that Christians are persecuted because they are prevented from forcing others to conform to their religious views (example), citing as examples of persecution the fact that public schools are not allowed to force students to pray, read the Bible or use the classrooms for religious instruction. In general, they warn against a separation of church and state, citing George Washington with “It is impossible to rightly govern the world without God and the Bible,” which is a fake quote. According to the brothers, religious freedom is also the cause of violent events in the US at present.

The brothers are also famous for their campaigns against Islam. According to David Benham, they were labeled ‘antil-Muslim’ several places after they, on September 11, 2011, “went to New York City and I remember watching radical Muslims marching through our streets screaming, ‘Allahu Akbar,’ and I stepped into the middle of the street and I began to proclaim the gospel and let them know that that stuff is not welcome in our nation.” Of course, that Muslim march took place entirely in David’s imagination – the reality/imagination is a distinction they systematically struggle with. The brothers did take part in a march against Islam, and specifically the so-called Ground Zero mosque, on that date, however.

In 2016, the brothers received the “National Heroes of Faith Award” from Vision America, whereas their father, Flip, got the “Don Wildmon Pastor Award.” Anyone with even a minimal level of normal decency would hang their heads in shame after being thusly marked.

There are decent resources on the Benham brothers here and here.