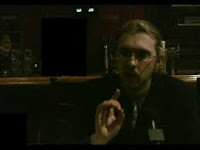 Of all the crazy sites on the internet, the webpage of Theodore Shoebat might be the craziest – it is an endlessly fascinating stream-of-consciousness maelstrom of hysterical, fundie paranoia, incoherent conspiracy jabbering and frenzied bloodthirst. And he is not running it alone; Andrew Bieszad is a regular contributor, with posts utterly unmoored in anything resembling reality, like “SHOCK: Wikileaks Emails Reveal Hillary Clinton Campaign Chairman Invited To Participate In Satanic Blood And Sex Magic Rituals With Devil Worshipping Artist”. Bieszad, who thinks that “all of the evils that we are seeing around the world can find its origin in anti-Catholicism”, is currently also affiliated with various fundamentalist Catholic groups and websites.

Bieszad has for instance expressed his thoughts (or whatever one should call it) on weather phenomena, as in his post “Hurricane Matthew Is The Wrath Of God Poured Out On The Cities Of Orlando And Savannah For Supporting The Evil Sodomites.” According to Bieszad, God is sending hurricanes as “a sign of His anger”, but can easily be stopped if we only “stop sinning, especially with sodomy” – the problem in this case is that “Florida is an area that is infected with sin, especially cities such as Miami and Orlando, which are veritable dens of sodomy.” Also, everyone who disagrees with himis in league with Satan (although homosexuality is “so wicked it even disgusts the demons of hell”). No, “thoughts” is not the right word here. Here is his take on the 2016 shootings.

Bieszad has also warned us that LGBTQ people are currently learning to use guns “not to defend themselves, but to attempt to position themselves so that when a politically advantageous situation arises, they can kill people.” After all, Bieszad has nothing to go on but his own dumb imagination and proclivities when forming his beliefs – facts are not in his repertoire – and such are his proclivities. It doesn’t help that he is legendarily dumb. Here is an example of the kind of stuff Bieszad spends considerable efforts thinking about.

Bieszad was apparently not a fan of President Trump, however, insofar as Trump didn’t use the power of his office to destroy the “sodomite agenda”.

On the conspiracy side of things, Bieszad concluded that the conservative publishing company Regnery is “a CIA front”, after yet another investigative foray into his usual source of data.