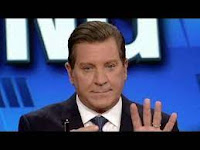 Eric Thomas Bolling is a television personality, wingnut political commentator, staunch misogynist, and author who, for some reason, seems to have a bit of a fan base. He used to be a Fox News mainstay (providing financial advice until 2017, when he turned out to be too shitty even for them. He has later been involved with TheBlaze and Newsmax TV.

An ardent fan of Trump – even his Fox News colleagues called him ‘an apologist for Trump’ – Bolling has also published the books Wake Up America (2016) and The Swamp: Washington’s Murky Pool of Corruption and Cronyism and How Trump Can Drain It (2017) (he couldn’t; Trump was the swamp, in all possible ways, but that wasn’t Bolling’s conclusion). Trump apparently considered Bolling for an appointment in the U.S. Department of Commerce. Bolling, meanwhile, has also promoted the candidacy of pizzagate conspiracy theorist Kelli Ward.

Bolling has a long history of making misogynistic and racist remarks. One recurring theme is his objection to allowing girls to play football, something that, as he sees it, is somehow part of “the wussification of American men.” Reacting to a story of a 9-year-old girl playing football, Bolling concluded with “Let the boys be boys, let the girls be girls,” because it’s not like girls would ever choose to play football unless liberal moonbats brainwashed them.

Bolling has also, in all his wisdom, lectured “rappers”, arguing that they should be happy because white people are “financing their lifestyles” by buying their music. And when the president of Gabon visited Obama in the White House, Bolling characterized it as “a hoodlum in the hizzouse.” According to Bolling, though, racism doesn’t exist anymore because there are “black entertainment channels.”

A hardcore conspiracy theorist (what do you expect from someone who writes a book with ‘WAKE UP’ in the title?), Bolling has pushed a number of classic but idiotic conspiracy delusions, including birtherism: Bolling was a latecomer to the movement but managed to establish himself as one of its main proponents. When Obama released his long-form birth certificate, Bolling didn’t buy it, asserting that “there is a legitimate question as to whether or not the president of the United States is allowed to be president of the United States” and taking it upon himself to examine the certificate on air, speculating that it was photoshopped. (He emphasized that he was JAQing off.) He has also pushed conspiracy theories about the murder of Seth Rich, and dismissed out of hand the police conclusion that Rich’s death was the result of a botched robbery: “It’s clearly not a robbery. There wasn’t a robbery. … This was a hit.” You’d look in vain for reasoning or evidence, but Bolling doesn’t work that way; instead, he concluded that there’s “lots of smoke right now”, being apparently confused by the smoke produced by the dumpster fire that is the mind of Bolling.

Bolling has also accused Obama of trying to “bring people closer to the cities” to keep an eye on them, suggested that Obama “let” an oil rig leak so he “could renege on his promise” to “allow some offshore drilling,” and suggested that “the Russians were colluding with Hillary Clinton to get information on Donald Trump.” Nor does he claim to know whether “the climate’s getting warmer or colder.” He could check. Reasonable people would check if there is something they are unsure of, especially if it’s something that would make them look like fools if they were wrong about. Bolling has little affinity with reasonable people.

After being cancelled by Fox News, Bolling made visits to Alex Jones’s show, and for a while hosted the show America This Week for the Sinclair Broadcast Group. At Sinclair, Bolling made conspiracy theories his mainstay, in particular promoting Stop the Steal nonsense and Trump’s campaign to discredit voting by mail and baseless claims that mail-in voting was prone to fraud. He also interviewed conspiracy theorist Judy Mikovits of the video Plandemic, which e.g. claims that Dr. Fauci “manufactured” COVID-19, as well as wingnut conspiracy nut (and Mikovits’s lawyer) Larry Klayman. Bolling did, needless to say, fail to challenge any of the incoherent garbage that fell out of the mouths of either guest. Sinclair responded by cancelling Bolling’s show.

Conspiracy theories are naturally accompanied by paranoia, and Bolling is paranoid about mostly everything, in particular communism. For instance, “liberal Hollywood was using class warfare” in a typical communist fashion in a 2011 muppets movie “to brainwash our kids”. Apparently, teaching kids distributive algebra is “pushing the liberal agenda”, too, and standard economic language is “Obama math”.

Like many wingnut conspiracy theorists, Bolling was outraged over Big Bird promoting vaccines, declaring that “Sesame Street are a bunch of communists” for “hawking the jab to five-year-olds.” That level of understanding of communism explains a bit about his take on financial issues, but is not the main problem with Bolling’s statement. Bolling has, in fact, had issues with Sesame Street for a while (lots of his persecution fantasies seem to involve puppets), imploring the children’s show to “move away from the left-wing communist diatribe they put out every single day.” Then he took a swipe at Fox for implementing a vaccine policy “months before they had to,” comparing their protocols to the network’s early – and accurate – Arizona call for Biden during the 2020 election. If there is a lesson to be made from that comparison, it was definitely lost on Eric Bolling himself.

According to Bolling, “Every terrorist on American soil has been a Muslim”. That’s because he uses the Family Guy test as part of his definition of “terrorism”. He also defended Trump’s false claim that “thousands and thousands” of Muslims in New Jersey cheered on 9/11 as the twin towers came down.

Diagnosis: Yes, yet another one of those. Not as loud or colorful as Alex Jones, but in his own way promoting the same nonsense. It’s not entirely clear how many fans he’s got left – and we cannot really imagine any real person being turned to the lunatic side by Eric Bolling – but there seems to be some of them.