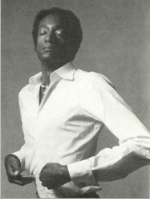 Why the question mark? Well, either Wiley Brooks is one of the most astonishingly loony loons to ever have walked the face of the earth, or else he is a fraud. There is evidence of the latter.

Wiley Brooks is the founder of the Breatharian Institute of America. Breatharians claim, simply enough, that food and possibly water are not necessary, and that humans can be sustained solely by prana (the vital life force in Hinduism), or according to some, by the energy in sunlight. Yep. There have been some casualties, so the lunacy isn’t entirely benign. The website of the Breatharian Institute of America is here, and must be seen to be believed.

Brooks states that his potential followers must first prepare by combining the junk food diet with the meditative incantation of five magic "fifth-dimensional" words which appear on his website. In the "5D Q&A" section it is, among other things, explained that cows are fifth-dimensional (or higher) beings that help mankind achieve fifth-dimensional status by converting three-dimensional food to five-dimensional food (beef). The "Holy Cows" section of the site includes a picture of cows with glowing eyes so that readers can sense the energy of the picture.

Well, some people does take such stuff seriously. Does Brooks? In 1983 he was allegedly observed leaving a Santa Cruz 7-Eleven with a Slurpee, hot dog and Twinkies. He has also admitted that he periodically breaks his fasting with a cheeseburger and a cola, explaining that when he's surrounded by junk culture and junk food, consuming them adds balance (good luck trying to figure out what this means).

In the Q&A section of his website Brooks explains that the "Double Quarter-Pounder with Cheese" meal from McDonald's possesses a special "base frequency". It is therefore recommended as occasional food for beginning breatharians. Similarly (or on the other hand?), he also reveals that Diet Coke is "liquid light". Prospective disciples are asked after some time following the junk food/magic word preparation to revisit his website in order to test if they can feel the magic.

Brooks also informs us that he may be contacted on his fifth-dimensional phone in order to get the correct pronunciation of the five magic words. In case the line is busy, prospective recruits are asked to meditate on the five magic words for a few minutes, and then try calling again; he avoids explaining how anyone can meditate with words they cannot yet pronounce. Brooks' institute has charged varying fees to prospective clients who wished to learn how to live without food, ranging from 15 to 25 million dollars (he does offer a payment plan, how nice of him).

In other words, the evidence for fraud is pretty strong. His personal webpage is here, where Brooks asserts that he has had previous lives as Adam, Zeus, Kuthumi, Enoch, Jeshua, Joshua, Elijah, Joseph of Egypt, St Francis of Assisi and William Mulholland.

An open letter to the citizens of Earth.

An essay by Bob “First I was a skeptic but then …” Silverstein.

Diagnosis: Possibly the most astoundingly insane person in existence, but very likely a fraud. The cult is rather dangerous to its own members (lots of Darwin award material there) but unlikely to obtain a wide-spread following for obvious reasons.
Posted by chaospet at 9:15 PM