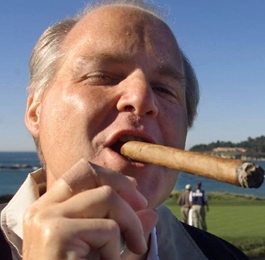 A short entry like this can obviously not do full justice to the epicenter of lunatic wingnuttery that is Rush “not a martyr” Limbaugh, so we’ll confine ourselves to a short list of randomly selected highlights.


One of the claims that best characterizes Rush “big, fat idiot” Limbaugh, is the reason he gives for not accepting man-made global warming – this is in response to a caller asking “Your belief in God, how does that tell you that global warming is a hoax?”: “I just intellectually cannot accept the fact that a loving God which has created all this beauty and has blessed this country – I cannot believe that a God like that – would punish the human being he created for progress, for improving the quality of his life.” This is an interesting take on the problem of evil. God punishing Haitians with an earthquake killing half a million people – not a counterexample to God’s love; punishing Western countries’ progress with no concern for the environment – inconsistent with God’s goodness. I think, however, that this belief excellently illustrates Limbaugh’s general pathologically narcissistic way of thinking. (Concerning climate change, he also said that the “alleged” scientific consensus “is just a bunch of scientists organized around a political proposition. You can't have consensus in science”. Anyone who fails to recognize the idiocy of that statement should at least read this). He has blamed Al Gore and environmentalists for the BP oil spill as well. The logic is unidentifiable.
Since he rejects manmade global warming, he also attempted to cover his back by claiming that the July 2011 heatwave itself was a government conspiracy to justify global warming.
By spring 2009, Limbaugh seemed to have become de facto leader of the GOP. Following Limbaugh’s claim that he was “wanting Obama to fail”, Limbaugh demanded apologies from Eric Cantor and Michael Steele for saying Limbaugh's comments were unacceptable. Both apologized.
Limbaugh is generally more well-known for his rank dishonesty and ignorance than for his lunacy, though there are good examples of the latter. Examples of the former are his commitment to family values while being caught returning from the Dominican Republic with a mislabeled bottle of Viagra, his calling – as a chickenhawk – soldiers who spoke out against the Iraq War "phony soldiers” while himself avoiding the draft in 1969 due to an “anal cyst” (lasting for years and years, apparently), and his promise to to leave the country if the Obama-driven health care bill passed: “I'll go to Costa Rica for healthcare.” (Costa Rica has universal health care). More on Rush and health care here, and this one is to the point as well. His claim that Obama created the recession as a payback for racism is a clear example of lunacy however, as is his denial of global warming mentioned above. And of course there is his claim that the Obama administration, always busy trying to undermine the country, was emphasizing the Aug. 2 date for raising the debt limit because Ramadan begins on Aug. 1.
Limbaugh is critical of feminism, maintaining that “[F]eminism was established so as to allow unattractive women easier access to the mainstream of society”. He also popularized the term "feminazi", referring to feminists "to whom the most important thing in life is ensuring that as many abortions as possible occur”; more here. And according to Limbaugh “the only thing cruel about the death penalty is last-minute stays.” On the Abu Ghraib scandal, he said that “This is no different than what happens at the Skull and Bones initiation ... And we're going to ruin people's lives over it and we're going to hamper our military effort, and then we are going to really hammer them because they had a good time. You know, these people are being fired at every day. I'm talking about people having a good time, these people, you ever heard of emotional release?”. And he has asserted that African-Americans are “left behind” socially because they have been systematically trained from childhood to hate America by figures such as Jeremiah Wright, Bill Ayers, and the Obamas. To top it off, he recently argued against paying repairs to American natives by claiming that the natives were the real killers and real beneficiaries of the settlement of North America. His brand of Barton-style revisionism is insane in its combination of ignorance and bigotry.
More here. Some of the falsehoods peddled in his book “The Way Things Ought to Be” are listed here (and a good, but too polite discussion, can be found here). Pat Boone has compared Rush Limbaugh to Thomas Paine, but Boone is not generally recognized for his mental abilities. His take on the Holocaust is also worth a read. Limbaugh is also sympathetic to creationism, by the way.
For an extraordinary display of delusional projection, see him accuse Shephard Smith of cowardice and everyone for tribalism and attempting to divide the country. This degree of serious lack of self-awareness verges on (ok, crosses the border to) clinical mental illness.
Rush’s slightly dumber younger brother David is a columnist for WorldNetDaily, and shares his brother’s views, though lacks Rush’s affability and diplomatic skills. He is also more oriented towards standard religious fundamentalist themes.
Diagnosis: His martyr and persecution complex is intense, and Limbaugh lives it out through an unsophisticated combination of bigotry and ignorance. The very epitome of a delusional wingnut, this crank has, of course, far, far too much influence. He is a really contemptible being.
Posted by chaospet at 9:25 AM