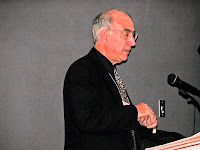 Well, Dan Ely is, in fact, a Professor of Biology at the University of Akron, and has, indeed, published some research. He “has no formal training in evolutionary biology outside what he may have received in an introductory biology course”, of course (though he certainly doesn’t point that out voluntarily), and received his formal training in a medical school environment. But yes, he’s got a title suggesting expertise in biology. He’s also a creationist. He belongs, in other words, to a group of rare specimens the anti-science brigade values very highly and knows to use that for what it’s worth.

Thus, Ely ended up testifying during the Kansas evolution hearings, for instance, where he displayed a rather fundamental lack of understanding of evolution, as well as some troubles with honesty (and tried to avoid answering questions about the age of the Earth). His colleagues at Akron, some of whom do, indeed, have a background in evolution, even published a letter decrying Ely’s “profound misconceptions” and misrepresentations in that context (emphasizing that “Dr. Ely is a physiologist whose religious beliefs have caused him to seek out non-existent ‘discrepancies’ in evolution to prove his preconceived notion that common ancestry must be false”) and decrying his portrayal of his interactions with the members of the department at Akron who actually do evolutionary research: Ely claimed that:

“I go to our molecular biologists that are following molecular phylogenies and I say, is there any discrepancy here? This is your area, it's not my area specifically, are there discrepancies? Are there controversies? Absolutely. And so they would go on to explain to me either from plants or from animals the different discrepancies that there are […] And as I went to further experts in our department that were geneticists and individuals in molecular phylogeny like this, I said, is there something that we're missing in evolutionary theory? I don't belong to any special groups. I've come to these conclusions on my own. And they said absolutely, absolutely there’s discrepancies. There's discussions all the time.”

Of course, the “discrepancies” are debates over details in the history of species, but Ely doesn’t present them as such. It’s a pretty familiar gambit among anti-science campaigners.

Diagnosis: Honesty is not the first quality that springs to mind when describing the situation, and it is easy to wonder to what extent Ely is a very virtuous person. It's not the first time we've seen religious fundamentalism in tension with the virtues the religion officially promotes.
Posted by G.D. at 3:01 AM