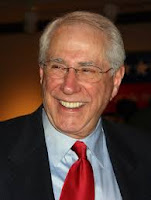 Maurice Robert “Mike” Gravel is a former Democratic senator from Alaska (1969-1981) who has achieved some popularity among left-leaning voters for his liberal stance on abortion, gay marriage, pot, welfare issues and climate change-related measures – popular enough that he briefly ran for the Democratic Party presidential nomination in 2008 before switching to the Libertarian Party. So yes, he has taken a very reasonable stance on plenty of issues, has even supported more funding and rigor in science education, and is opposed to creationism and politics governed by religion (he has even released a video on YouTube called “The Oppressive Nature of Religion”, and tends to dodge questions about faith in debates, saying rather that society should be guided by love, not religion).

But Gravel is also a serious conspiracy theorist. He supports a new investigation into the 9/11 attacks, saying that “critically important evidence has come forward after the original government building reports were completed.” That “evidence” seems to refer to the work of controlled-demolition loons like the group Architects and Engineers for 9/11 Truth.

He’s also a UFO conspiracy theorist. In 2013, he was one of several former members of Congress (e.g. Carolyn Cheeks Kilpatrick) to accept $20,000 from the Paradigm Research Group, an advocacy group for UFO disclosure, to be part of what they term a Citizen Hearing on Disclosure – modeled after congressional hearings – regarding their delusional belief that the U.S. government is suppressing evidence concerning UFOs. Gravel was apparently totally on board: “Something is monitoring the planet, and they are monitoring it very cautiously, because we are a very warlike planet.” And he made sure to take a jab at skeptics: “What we’re faced with here is, in areas of the media, and the government too, an effort to marginalize and ridicule people who have specific knowledge,” thus undermining in a matter of seconds many years worth of good work on behalf of sound science and science eduction in the areas of e.g. biology and climate change.

Diagnosis: Once he may have been (at least more or less) a good guy. At present he’s the cranky old conspiracy theorist uncle who ruins Thanksgiving dinners. It’s sad, but you really, really shouldn’t be listening to this fop at all anymore.
Posted by G.D. at 3:42 AM