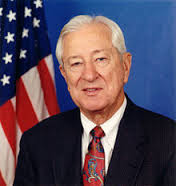 Ralph Moody Hall was the deranged idiot who served as the United States Representative for Texas’s 4th congressional district from 1981 to 2015 (Democrat until 2004; Republican afterward) and who was apparently trying to demonstrate beyond doubt that Texas’s 4th congressional district is composed largely of morons (he’s done a pretty good job of that). Hall notably served as chairman of the House Committee on Science, Space and Technology from 2011 to 2013 because he is clueless and would be unable to distinguish scientific reasoning and evidence-based conclusions from a broomstick if his life depended on it, and because the party he served evidently hates science.

Hall, who doesn’t like the conclusions scientists draw from their data, says that scientists “concoct evidence to obtain grants” – in particular climate scientists, who systematically tend not to come to the conclusions Hall has deluded himself into believing. In particular, Hall doesn’t believe climate change (if it exists – the earth might be freezing, according to Hall) is in any way manmade, since “I don’t think we can control what God controls.” (Remember, again, that this was the chairman of the House Committee on Science, Space and Technology.) He did emphasize, however, that “I’m not anti-science, I’m pro-science. But we ought to have some believable science,” where “believable” of course means believable to Ralph Hall, who has already demonstrated that he is a moron and a conspiracy theorist. Also climategate, and the fact that this purported conspiracy has been as thoroughly refuted as the earth’s flatness is something he can easily dismiss by claiming that the conspiracy just goes even deeper, encompassing also everyone who investigate the conduct of professional scientists and come to conclusions not in alignment with the conclusions he has persuaded himself into believing through non-rational reasons. He has also threatened to subpoena scientists who come to conclusions he doesn’t like.

Instead of accepting the scientific consensus, Hall presents his own perspectives. Of the Deepwater Horizon disaster, which killed 11 men and was an environmental disaster, Hall said: “As we saw that thing bubbling out, blossoming out – all that energy, every minute of every hour of every day of every week – that was tremendous to me. That we could deliver that kind of energy out there – even on an explosion.”

He wasn’t alone. Hall’s House Committee on Science, Space and Technology also included young Earth creationist and global warming denialist Paul Broun, Todd Akin, who is most famous for his idiosyncratic beliefs about human anatomy, and Dana Rohrabacher, who thinks the solution to global warming is to clear cut forests. The Vice-chair was Jim Sensenbrenner, who believes the Earth is cooling but not that CO2 is a pollutant: If it were, says Sensenbrenner, we’d all “need to put catalytic converters on all our noses. The fact that people think CO2 is a pollutant … basically goes into propaganda.” He has also referred to the scientific consensus on global warming as a “massive international scientific fraud.”

Diagnosis: Befuddled but raving old lunatic (and no, it’s unlikely to be pretense) whose lack of critical thinking skills border on the impressive, even for the group of peope he usually associates with. He’s out now, but may have provided us with a lasting and harmful legacy.
Posted by G.D. at 2:43 AM