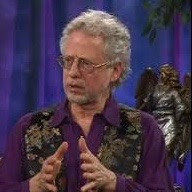 Although early, comprehensive introduction to opera and twentieth-century symphonic music can only make you a better person, the so-called Mozart effect is a myth. Unfortunately, many people (Don Campbell in particular) didn’t receive the memo. But I guess what Steven Halpern is promoting isn’t really the Mozart effect, but something he has … invented himself. According to his website, which looks precisely the way you would expect given the contents, Halpern is a “GRAMMY award-nominated composer, recording artist and researcher” (oh, yes). Indeed, he is the “founding father of modern sound healing whose music relaxes the body, quiets the mind and soothes the soul.” Methinks there may be rival claimants for that epithet, and what Halpern offers is really not more original than desperate marketing by way of trying to link his rubbish (I haven’t heard any of the music, I think, and don’t want to; it’s rubbish) to any minimally popular contemporary fad. What’s the fundamental idea? Apparenty Halpern’s goal is to replace everyday background noise with sounds that resonated better with the chakras, no less.

“After being initiated into what he has described as a ministry of healing music, Steven was encouraged to scientifically validate the extraordinary effects his music was having on listeners. This became the focus of his graduate studies [strange … he doesn’t say where … why is that, you think?], and his landmark research exploring the connections between sound, consciousness and healing were the first to employ the more subtle and sophisticated new technologies of brainwave biofeedback and Kirlian (aura) photography … Since 1975, Steven Halpern, Ph.D. has been a popular speaker at leading holistic health and complimentary healing centers and conferences worldwide.”

Yes, Kirlian photographies were his data. “Sophisticated” is not the right word choice in this context. And where is this trainwreck leading, you may wonder? Well, it takes us by things like “subliminal affirmations”: “By combining my relaxing music with subliminal affirmations, we create a more powerful program that focuses on a particular outcome that supports your goals. … The series of positive suggestions are spoken normally, but mixed very softly into the music. You don't audibly hear these affirmations, but your subconscious mind does, and responds accordingly!” He also offers “brainwave entrainment”: “When done correctly, as you'll experience with Aural-Sync™ brainwave entrainment soundscapes,” you will obtain healing effects, sometimes so powerful that although the recording crew was “blown away, and we all anticipated the public’s response when the segment aired,” the effect “was ‘too powerful’ and did not make it through the final edit.” Almost exactly like magic and televangelists raising people from the dead in Africa when no one is watching.

But you’ve already guessed where it ends up, haven’t you? Oh, yes: It’s quantum! “Based on his own spiritual and health-related experiences, Steven discovered secrets of combining ancient sound healing traditions with quantum biology and energy medicine.” Nope: not the faintest clue what quantum mechanics may be. Or biology.

He has also written a couple of books, Tuning the Human Instrument and Sound Health.

Diagnosis: Oh, yes, it’s ridiculous. But Steve Halpern is a ridiculous guy, and so is his audience – of which there are, apparently, plenty. I am reluctant to call him “dangerous”, however.
Posted by G.D. at 4:19 AM